Another in the long list of reasons why I love this country... 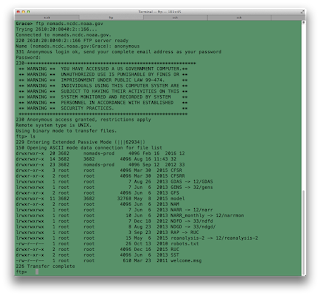 Anyone can ftp into this NOAA server to download weather and climate data for free! Check out how easy it is to anonymously ftp into the data server.  Use "anonymous" as your username and an email address as your password*.

Now what do you want to see?

This is where all the weather apps and websites get their data. They just package it up and add advertising or charge you. You can do this yourself with a computer by getting the data from NOAA and the easy-to-use Panoply software from NASA for free.

Posted by badmomgoodmom at 23:07 No comments:

Air is a common resource. Each of us suffers from degradation of the air quality, but we have no little control over what others do to the air that we personally breathe.

When people think of the Boulder, they don't often think of air pollution. But, the elevation and topography (mountains to the west and northwest and the Louisville Rise to the east and southeast), and the automobile traffic in this small town, mean that the nose-level pollution in central Boulder is usually higher than the western coastal neighborhoods of Los Angeles. (My doctors had recommended in the 1990s that I move away from Boulder for my health and suggested coastal LA as a good alternative.) 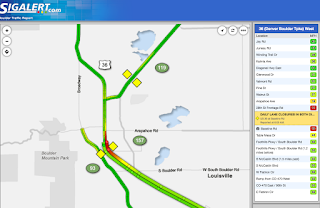 You can't see ozone, but it is created by a combination of automobile exhaust and sunlight, specifically UV radiation.  At high altitudes, we have plenty of UV (and cosmic ray) radiation. 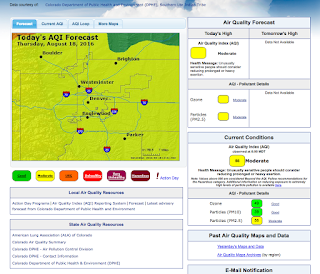 Ozone is a lung irritant.

We can't control sunshine, so the only way to keep the ozone from reaching dangerously high levels is to refrain from driving.  That means you AND me.

But, sensitive people are cautioned from strenuous outdoor exercise during high ozone days.

What does an asthmatic do when an Ozone Action Day is called?  Ride my bike and possibly have an asthma attack?  Drive solo and pollute the air even more?

The combination of pollen and ozone is particularly irritating.  People with pollen allergies can be affected by lower levels of pollen when ozone is present.  The only time I ever ended up in a clinic gasping for breath was when I went for an after work run (in grad school in the 1990s) up Boulder canyon during a day with both high ragweed pollen and high ozone.  I now get allergy shots and that has helped somewhat.  But, I still avoid outdoor exercise when pollens are especially high.

Fortunately, my bike and I can pick up a shuttle bus to work 2 blocks from my condo and be whisked up to the main entrance of Mesa Lab. 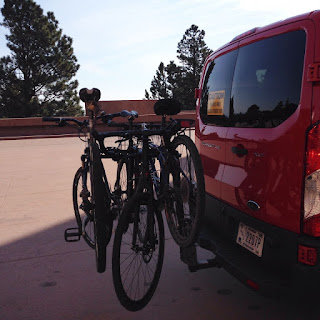 So many of my coworkers did the same, we filled up both the front and rear bike racks of the van. 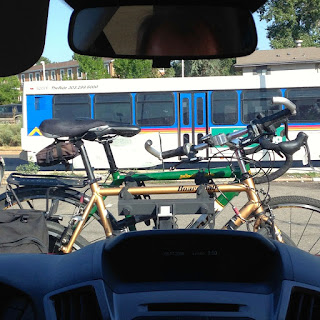 Some even took the RTD bus to meet the shuttle.

The best part of leaving the driving to someone else is that my hands are free to take pictures like this. 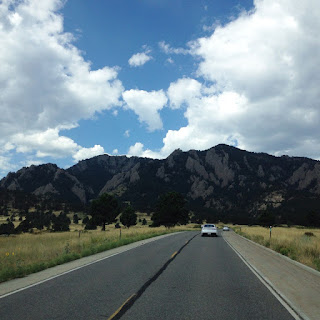 The ride home is an 800 foot elevation drop, so it is not the strenuous type of exercise that would be dangerous for me. 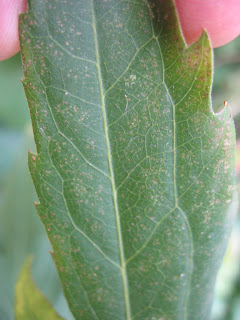 Posted by badmomgoodmom at 16:51 No comments:


With wildfires burning all over the western United States and floods ravaging Lousiana, this is a good time to reread Fire is a river that runs uphill.


One major reason that fire fighting in the western forests has become more expensive is the number of structures (homes) being built in the trees. One Colorado newspaper had the guts to run a story questioning if our firefighters should risk (or lose) their lives protecting the vacation homes of the rich after twelve firefighters died in the Storm King Mountain fire.

Posted by badmomgoodmom at 07:19 No comments:

Why reinvent the wheel if something works?

I know that 'indie' and 'designer' patterns are all the rage in the blogosphere, but the 'Big 4' (but now really 6?) put out some solid patterns without much fanfare (e.g. blog tours.) Take Simplicity 2263, which looks rather pedestrian.

All patterns are 'designed' by someone.  Bold face names do not have a monopoly on good design.  I've had more misses than hits with indie patterns and their instructions.

However, I pick up some signals that others may overlook.  Have you heard of American Sewing Guild (ASG)?  ASG probably doesn't have a booth at 'Maker' faires, but ASG members know quality sewing.  (Disclaimer, I used to belong, but am not currently a member.)

Patterns with the ASG seal of approval tend to be very well drafted and extensively tested.  When I see a new pattern with the ASG seal, I pay attention.  This blouse with a back that extends over the shoulder to the front is a winner.  I've sewn it three times.

I made the first version in 2013 with a 1/2 yard remnant of rayon challis that I purchased at Britex at PR Weekend SF 2012.  1/2 yard is obviously not sufficient, so I improvised a yoke with a scrap of ponte.

When I saw this gray and red rayon challis at Elfriede's in Boulder, I snapped up a yard to sew another one for an upcoming MIT alumni event. (Is it the female version of a school tie?)

I used the serger for version 1.  Version 2 and 3 got the full french seam and bias binding clean finish.

I recently made a third version, with a rayon crepe I bought at SAS Fabrics in Hawthorne (near LA.)  Rayon crepe is rarely found in fabric stores.  When I found this small piece in a pretty print, for only $3, I brought it home without any immediate plans for it.  After I made version 2, I knew this remnant wanted to be version 3.

You want to see them out in the wild?

A great, easy-to-make and easy-to-wear basic.  What's not to like?

Posted by badmomgoodmom at 22:32 3 comments:

There's also the matter of a presidential candidate suggesting or joking that people assassinate his opponent and the judiciary.

Let's talk about something that makes me mad, but only mildly so.  This also gives me a chance to jump up and down on my soapbox about bad data crunching.

Exhibit A, this piece of click bait from the NY Times with a tone of schadenfreude toward engineering majors:

I clicked and read these counter-intuitive numbers. 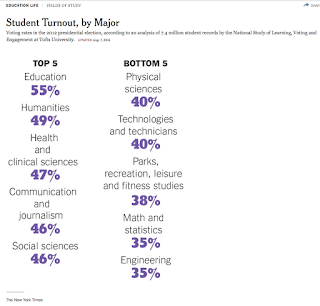 This doesn't jibe with my personal experience. Physical scientists that I know are very, very civically engaged. How could we be such slackers when it comes to getting to the voting booth when I see "I voted" stickers on everyone in lab on election day?

Do I know a very atypical set of physical scientists?  I had a hunch that, perhaps, it is because (outside of school and student jobs) I have always worked in national labs that require US citizenship?

I did a little research.

First, I went to The National Study of Learning, Voting, and Engagement (NSLVE) website and read about the project. There appears to be a database accessible from that website. Because I'm not a participant in the research, I lack access to it.

There also appear to be some scholarly articles, which might have the summary data cited by the NY Times.  Again, I lack access to the articles.  (I'm not going to pay $41 for 24 hours of access to an article that may or may not have the data I seek.)

Search for "The National Study of Learning, Voting, and Engagement report". I was able to find several, including reports for Columbia and Long Beach Community College students.

In each report, I saw that the figures for % of eligible students voting by major was calculated using IPEDS and the same percentage was applied to all majors at a school, given the schools' overall demographics.


This is based on the percentage of non-resident aliens reported by your institution to the Integrated Postsecondary Education Data System (IPEDS), and is more reliable than the demographic data campuses provide to the Clearinghouse at this time.

Do you see the statistical flaw? The reports gave the numbers with this caveat at the top:


Your students broken down by field of study. Please note that we are not able to adjust these voting rates by removing non-resident aliens.

The NY Times' poorly-researched and reported listicle did not include any methodology or context.

OK, now let's read what the National Science Foundation has to say about Higher Ed in Science and Engineering.
Moreover, physical science and math students are vastly outnumbered by business and other students; the US graduated 19 business majors for every math or statistics major in 2011. 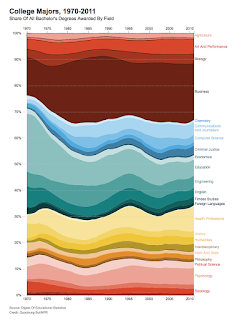 Let's list what we know:
I found all sorts of interesting information, especially at the National Center for Education Statistics:
Anyway, after examining the data, I think it is very, very likely that physical science students that are eligible to vote do so at higher rates than journalism students.  I'm sure The average physical science student is better with data than the average journalism student.  We might even be better than the average NY Times journalist.

Another piece of bullshit debunked.

Remember the Harley Quinn costume I made for my daughter? 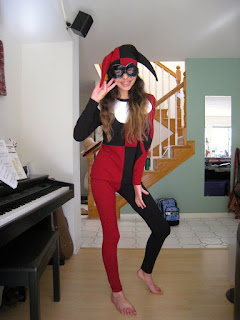 And my ambivalence about the hyper-sexualization of females in comics?

Check out the slide show about Harley Quinn cosplay in the LA Times. Look at the difference in (un)dress between the male and female cosplayers.

Then check out this tweet from David Helder pointing out the sexism at #defcon, a computer security conference. Please note, this is happening in 2016.


Hacker Jeopardy. Category is "Dicks". Men play. Women give them beers. Why aren't there more women in security?

Click to see the questions on the screens. To play this game, you have to have encyclopedic knowledge about p@rn.

Scroll down to read the discussion.  This is the state of one corner of tech.  I am not sure other areas of tech are any better.
Posted by badmomgoodmom at 11:34 No comments:

Two links while I catch up at home

I'm back home after two weeks away.  I'll post more about the trip when I come up for air.

I found a couple of related links too good not to share.

In What is fashion good for? Part 1, Timo Rissanen explains that the current fashion system is terrible for the planet because it is terribly wasteful. It's also very harmful to the people involved in creating the cheap clothes that most people wear.

Home sewing is part of the solution.

The NYT profiled the McCall Pattern Company in Sewing for the Instagram Generation.
Posted by badmomgoodmom at 23:08 1 comment: