Send the client out of the room so they don't know how easy it is.

Backstory:
In my never-ending quest to offload household duties, I am teaching Iris some basic sys admin (computer system administration) skills in the hope that she will take over the routine stuff for me.  I told her how much she could charge clients hourly for that kind of work and she was all ears.

She already has grandiose plans to start a computer sys admin co-op (like a babysitters' club, only higher-paying) with two other girls in her school.  For some reason, she thinks she should be the boss.  The other girls may have different ideas.

Is anyone interested in reading the kind of things that I am teaching her?  It applies mostly to Mac OS X and Unix.  We are also doing some things in Mathematica, csh/tcsh and perl.

I imagine the other two girls' moms can teach them more.  After all, they actually hold degrees in EE and/or CS.  One has a PhD in EE and founded her own start-up (with employees and patent applications).  I've met so many parents at her school who have start-ups in their garages.  No wonder there is a shortage of street parking in our neighborhood.
Posted by badmomgoodmom at 21:37 5 comments:

NASA's Jet Propulsion Laboratory (JPL) is hosting a free event in celebration of Climate Day 2010.  Read all about it here.

Note that JPL is holding this event at the Pasadena Convention Center, and NOT at JPL.  Registration is required for Friday, but not on Saturday.  Though the event is free, parking is not. 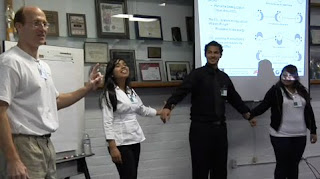 It's a small world.  Who should I see on the Climate Day Info Page, but someone I met while working in Berkeley's analytical chemistry lab?

Posted by badmomgoodmom at 21:22 No comments:

It seems like more stories run about the so-called Oscar curse (debunked here) and a tattooed other woman than about World Water Day.  (Though WWD did get more coverage in the US press than International Women's Day.)

This month, I had the pleasure of hearing Esther Duflo talk about Experiments, Science, and the War Against Poverty.  She opened her presentation with some context.  Millions of people die every year from preventable diseases; billions more suffer needlessly.  The death toll in Haiti from the earthquake in January is equal to the number of people worldwide who die every 8 days from poverty and lack of access to simple things like clean water, clean food, basic medicines and mosquito nets.

In honor of World Water Day, here are a couple of links:
Please walk your watershed and share your experiences. Leave a comment with your discoveries.
Posted by badmomgoodmom at 23:25 No comments:

The LA Times has discovered clothing recycling.  But I am annoyed by statistics without methodology.  On what basis did they derive this figure?


The average American throws 54 pounds of clothes and shoes into the trash each year. That adds up to about 9 million tons of wearables that are sent into the waste stream, according to the Environmental Protection Agency — a 27% increase in a mere eight years.

Coincidentally, we did some wardrobe refashioning this weekend chez BadMom. I took some of Iris' old clothes, thoroughly cleaned them with oxygen bleach and then synthrapol, then dyed them in colors to suit her cousin.  Iris often wears clothing blanks from Dharma Trading in their white, undyed state.  When they get dirty, we dye and/or paint them to cover the stains.  Because she had nearly outgrown these items, I remade them for her younger cousin.

The tie-dye guests brought some old clothes for dyeing and dyed some new clothing blanks with Iris.  Each of the three girls got a new short-sleeved smock top and a 4-tiered lined skirt.

The guests brought 3 dozen free-range eggs.  They call their house "the farm".  They have an ingenious setup with a chicken coop and a vegetable garden enclosed on all sides in chicken wire.  The chickens eat the insects and fertilize the veggies.  Home-made compost also fertilizes the veggies.  The lots in our neighborhood are too small to legally raise chickens.  But this "farm" resides in the (Beverly) hills, so the lots are large enough to support urban farming.

The eggs were amazing.  Bad Dad immediately cooked some up with faux (soy) chorizo.  It was worth delaying the commencement of the dyeing to enjoy a second breakfast.

I will try to post pictures of some of the tie-dye later.

I am on light duties at work this month (4-6 hrs per day) due to an arthritis flare-up.  Recovery and proposal writing, not blogging, have been my priorities this month.  The good news is that I am recovering without any intervention beyond rest, twice weekly physical therapy and daily gentle exercise.

Aside:  Did I mention that the recipient of 20 of my backyard Meyer lemons presented me with a quart of home-made Meyer lemon sorbet?  Or that he promised me some Meyer limoncello next month? Or that the college friends from the past weekend brought a bag of their home-grown grapefruit and blood oranges?  I had served them apple-persimmon cake during the 33 meal marathon and they promised to freeze some Hachiya persimmons from their tree for me next fall.
Posted by badmomgoodmom at 22:57 5 comments:

How on earth did I miss this LA Times special feature, Send in the Gowns.  Do you agree with Freddie Leiba's list of the most seminal Hollywood movie gowns?

What about movie gowns from elsewhere around the world?  Please tell me your favorites and provide links (if you can) in the comments.
Posted by badmomgoodmom at 20:40 2 comments:

The trouble with cosleeping

See the rest of Good Night and Tough Luck.  But put down that hot coffee first.
Posted by badmomgoodmom at 07:09 2 comments:

Like Carolyn, I have a well-aged fabric collection.  Stashes are shameful things.  My fabric collection was lovingly curated over the years--a source of creative joy, not shame.  Here is one example. 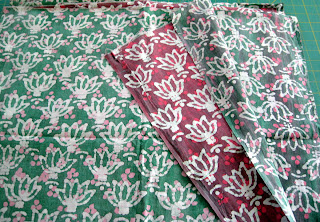 I bought this fabric in the early 1990s.  I don't remember where I got it, but it wasn't very expensive; I was living on a grad student budget at the time.  I bought about 5 yards of this medium-weight, smooth cotton.

When I got it home and took a good look at it, I couldn't figure out how it was made.  It is clearly batik, because the white resist areas are the same on both sides.  But how did they dye it with two complementary colors (opposite each other on the color wheel) without making a brown mess of the whole thing?

I used the fabric in several quilts.  About halfway through with the yardage, I realized that I had to conserve it.  I have not seen such fabric in the stores since and I have to keep some in my collection.

Life is serendipitous.  I once sat on an airplane next to a gentlemen from Chennai (Madras), one of the great textile centers of the world.  He now lives in the US and makes his living importing fabric.  I described my fabric puzzle to him.  He knew what I was taking about immediately.

He said that the fabric was stamped with wax and then rolled upright between two dye spreaders.  The dye viscosity, speed at which the fabric moves and the fabric thickness had to be perfectly calibrated so that the dyes cover each side, but do not bleed though into one another.  He said that only a few manufacturers had the equipment and the know-how.

I asked him why I can't find that more fabric like it.

He said it was because it would be too expensive for the American market.

"How much is too expensive?" I asked.

Are you kidding!?!  How much would it cost to import and sell this magical fabric in the states?

I know Bangalore is not Chennai, but my neighbor from Chennai says that, anything you can buy in Chennai, you can also find in Bangalore.  (Of course, she doesn't sew so she doesn't know if this applies to fabric.)  Perhaps Eric and Celeste can show this picture to merchants in Bangalore to see if they can buy some.
Posted by badmomgoodmom at 21:47 3 comments:

Chez Bad Mom has hosted three families on their return flight (not at the same time).  We are as close to LAX as you can get and still not be under the flight path.  Moreover, we are the cheapest bed and breakfast in town.  Heck, we even drive you to the airport for your connecting flight and pack you a sack of in-flight snacks!

And, if you have college friends over for the weekend, then other college friends in the LA region will stop by.  Add a coworker that had just come home, tired but exultant after participating in the successful launch of GOES-P.

As I filled the dishwasher for the 8th time this weekend, I totaled up the meals.  We served 33 home-cooked meals to 12 different people between Friday evening and Sunday afternoon.  Most of the food was cooked from scratch.

Miraculously, we ended up with more beer and wine at the end of the weekend than at the beginning.

It was a very good weekend, but I need some quiet time alone.  I sent Bad Dad and Iris to an Oscar party elsewhere while I go to bed early with a book and a 70 page DARPA BAA.  Light bed-time reading after all that heavy lifting in the kitchen.
Posted by badmomgoodmom at 20:10 1 comment:

Cathy Horyn of the NY Times says that The Big New Idea is Modesty, as evident by the outfits shown here in NY Fashion Week.  (But, if these are the Fall/Winter collections, why doesn't the evening gown have sleeves?) 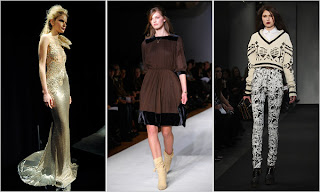 In Milan, women go to work without pants 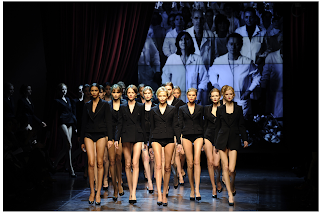 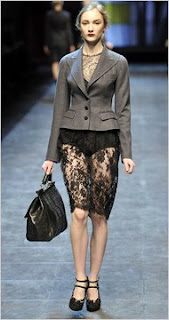 It evokes that cliche nightmare when you give your important presentation and then realize you forgot to put on pants that morning.

* The Dolce and Gabbana pictures were taken from reviews here and here.

BTW, what do you think of the new "diversity" on the runways?  I don't see much change in the spectrum of women in the pantless herd above.
Posted by badmomgoodmom at 21:33 3 comments:

I have written about Berkeley food in Full Days and Food Memories. Now read the LA Times travel article, A foodie tour of Berkeley's Gourmet Ghetto.

Click through to Planning your trip to learn about other food tours, including the one I have to take someday,


I Can't Believe I Ate My Way Through Chinatown! Bay Area native Shirley Fong-Torres has been offering this three-hour tour from Wok Wiz for more than 25 years. Cost is $90, which includes lunch. (650) 355-9657, http://www.wokwiz.com.

Aside:
I once went to a party at a students' rented home on Cedar, a block east of Shattuck. The backyard vegetable garden was unbelievably lush. I asked which housemate had the green thumb. They replied that none of them were gardeners. Alice Waters rented their backyard from the landlord; her gardener came over to tend the plants and her chef came over to pick the produce. Apparently, she rented yards all over the neighborhood. Now that's a locavore!
Posted by badmomgoodmom at 21:01 3 comments: