Our family is looking forward to the opening of Crazy Rich Asians tomorrow.  Have you read the books?  They are really fun and funny, but in no way describe the lives of typical Singaporeans.

Even the house of the non-crazy rich college roommate is very atypical.


As a math major and former volunteer math tutor at public schools, I was asked often about the merits of Singapore math. My stock response is that I'm sure our kids would do better in math (and reading) if we had Singapore housing (and health care.) Once kids are adequately housed and cared for, I'm sure they will do better in math.

Did you know that the majority (82%) of Singaporeans live in public housing? Read more about Singapore Housing from their Housing Development Board (HDB) and an article describing its strengths and shortcomings from the Economist.

Contrary to conservative arguments that public welfare projects make people soft and lose their drive, public housing usage has gone down from a high of 87% in 1988-1990 to 82% today.  Give people clean, safe, and conveniently-located--albeit small--housing, and they may work a bit harder to get bigger digs on the open market.

Anyway, single family homes (never mind palatial estates on huge park-like grounds) are exceptionally rare. Most people live in mid and high-rise condos of modest size. You can see sample floor plans of HBD condos by scrolling down to Housing Types on the HBD intro page.  I found the virtual flat tours entertaining and informative, though slow to load.

5.8 million Singaporeans live on island at an average density of 8157.61/km² or 21,573.9/mi2.  That's slightly less than NYC's 26,403/mi2. It's important to note that Singapore is a sponge city, with roughly half of its land surface area left open for park land and water capture. Thus, their effective population density is doubled. Check out the 3D maps of Singapore on Google Maps. It's so green. There is so much park land. The buildings are so tall. 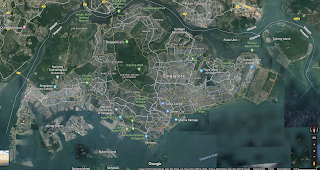 I found the ending of the Crazy Rich Asians trilogy hugely disappointing from an urban planning perspective.  "Saving" the family home means leaving it incredibly low density for a lucky few, while the rest of the population is squeezed into small condos.

Despite the ending, I highly recommend the trilogy, especially book 3, Rich People Problems.  It deals with the darker side of inequality in Singapore.  I don't know what it means when a bride is given two teen-aged "ladies in waiting" for life. I think I know what it means, but I want Crazy Rich Asians to do well at the box office so that I can see how book 3 is represented on screen.

If you want to read a really good book about racism and inequality in modern day Singapore, try Cheryl Lu-Lien Tan's Sarong Party Girls. Don't believe the mediocre ratings on Goodreads by people who were disappointed that the content did not match the upbeat chick lit cover.


“Through the insouciant voice of her heroine, Tan delivers a stinging and deliciously subversive critique of Singapore’s patriarchal social system. You’ll be so busy laughing at Jazzy’s outrageous cheek, you won’t notice until it’s too late that your heart has been broken.” - Hillary Jordan, author of When She Woke

[One of my friends moved to Singapore to work on their push for water independence from Malaysia.  I'll write more about that in my water series, starting with the water recycling plant near my home.  Yes, Los Angeles/Orange County has joined the ranks of advanced water recyclers like Israel and Singapore.  SoCal just needs to expand our capacity and work on improving our landscape permeability.

I feel torn between sticking to "my lane" and blogging  about science and water, or pointing out that homelessness is virtually eradicated in Singapore while SoCal has tent cities of homeless people everywhere.]
Posted by badmomgoodmom at 22:06 4 comments:

How sticky is it?

I don't want to hear about how it is not that bad compared to Miami.  I didn't move to Miami for a reason.

My bedroom when I woke up this morning (generally the coolest part of the day.)

Upstairs in the afternoon:

What about the cooling sea breeze every afternoon? Nonexistent. The land-sea breeze is driven by the temperature contrast between the ocean and land. Check out this animation. 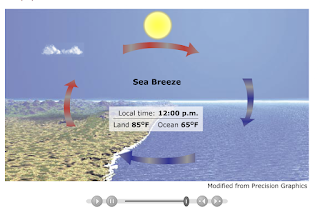 If the ocean is warmer than usual, the sea breeze weakens.

Right now, the sea surface temperature (SST) anomaly (difference from average temperature over many years for the same date) is about 3 C or 5 F warmer than usual.


The ocean is about 22 C or about 71 F.
In fact, the SST at the Scripts Institute of Oceanography in San Diego is the highest in their recorded history. 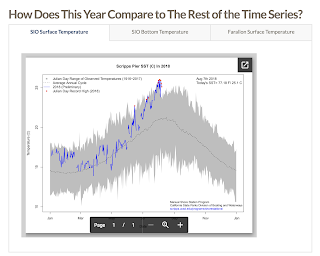 I used this handy dandy relative humidity-dewpoint calculator to plug in my bedroom measurement of 84% and 76 F and got a dew point temperature of 72 F. Coincidentally, that's almost the SST offshore.

I checked my measurement against the calibrated weather station at LAX airport.  Their weather station is closer to the ocean than my house, so it will be cooler and breezier.  It looks like they are less humid, too.  (Master bedrooms run more humid than other bedrooms because of the en suite bathroom.) 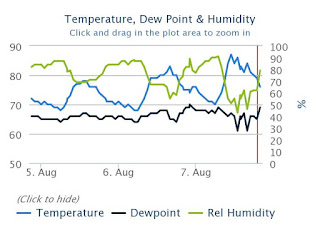 In conclusion, it's not as hot as it was in early July.  But the humidity is higher and my misery is just as high.  I'm going to take a cool shower and then settle back with a book (Lightning Men) and an iced drink.

PS 5 years ago, we replaced our dark asphalt composite shingle roof with a highly reflective glass composite "cool" roof.  It made a difference and we patted ourselves on the back for not installing air conditioning, which would have cooled our home down, but heated up the planet overall (pesky thermodynamics.)  But now I'm regretting that.  As long as people are driving long distances in huge vehicles and eating tons of meat (paleo diet, I hate you!) I might use AC.
Posted by badmomgoodmom at 21:06 2 comments: