I'm usually an EV (electric car) pessimist, but a couple of things make me hopeful.

You can set lofty goals in the future, but stymie real and substantive changes today.  I see that at all levels of California governance.  E.g. you can put an electric car charger on the sidewalk of a downtown LA street, which precludes installing a bike lane later. I walked by the charger below and lamented the lost opportunity.

But, LA actually installed a 'parking protected' bike lane right there, and a bicyclist flipped off his bike one night when he ran into the cable in the dark.  He posted a photo of what he saw in the dark on Twitter.  It went viral.  See the staged photo below, which highlights the black cable in orange. 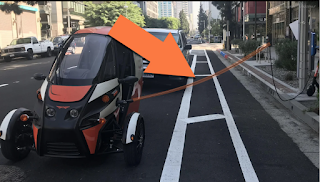 Notice the narrow width of the bike lane to accommodate private car storage on a downtown LA street.  I may not be a Climate Mayor, but even I know that using streets to move people rather than store private property is a better use of public space.  Don't @ me about customers arriving in cars.  People spend money.  Cars do not.  In fact, providing car parking is a huge expense for business owners and society in general.

There are lots of parking garages in DTLA and our family even uses them sometimes.  But I mainly use transit to get to and around DTLA because it's too crowded to do otherwise.

When I realized that we used our minivan mainly for getting to the light rail station and our annual road trip, we decided to replace it with a folding electric scooter (for coupling with transit) and occasional car rental.   I already had an eBike, and used it for most of my local Beach Cities and West Torrance trips.  If our area had better bike facilities, I could travel even further. Sigh.

Electric cars (what most people refer to as EVs) are very popular in the Beach Cities.  But, I think we should also accommodate smaller electric vehicles, such as my 0.3 kiloWatt-hour scooter and 0.5 kWh eBike.  In contrast, the very popular (in our area) Tesla X has 100 kWh batteries.

Batteries are so toxic, resource-intensive and sourcing their raw materials are so problematic environmentally and socially, I won't go into it here.  It just makes sense to move people around in the smallest package necessary with the least amount of batteries.

But, that's not how we're behaving.  It makes no sense to celebrate replacing 4000 pound ICE cars with 5000 pound EVs while not simultaneously working as fast as we can to get people out of cars in the cities.

What will we do with the growing pile of spend batteries?  Until recently, they were just piling up dangerously.  Some were sent overseas to poorer countries, that stockpiled or recycled them in (sometimes unsafe ways, especially for their workers).  That is not a long-term solution. 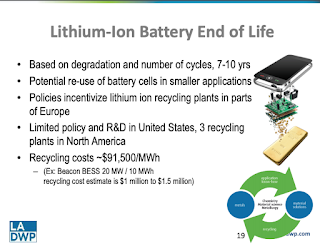 Available Li-ion battery recycling facilities are few and expensive.  Until recently, there were only three in all of North America.  Furthermore, it would cost ~$91,500 to recycle one MegaWatt-hour (MWh) of Li-ion batteries.  A Tesla X has 100kWh or 0.1 MWh; recycling its batteries would cost ~$9,150.  In contrast, my eBike has 1/200th the batteries and my scooter has 1/300th the batteries.  I can also travel about 40 miles by eBike on the same electricity that moves a Tesla 1 mile.

Ideally, spent batteries should be circular and recycled into new batteries.  While lead-acid batteries are circular, the Exide and Quemetco battery recycling plants in LA County were not good environmental neighbors.  There are limited ways to recycle batteries--smelting (heating to evaporate away all the non-metals), leaching (repeated acid/water washes to carry away the metals) and physical (electrochemical). 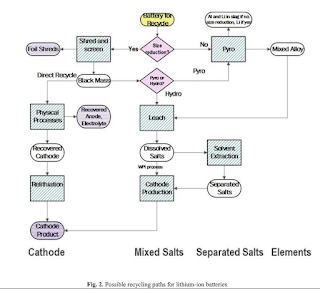 In LA, with our limited water supply, smelting was used.  A small fraction of the lead escaped through the smokestacks.  (I never understood how that happened if strict emissions control equipment were used, but it did.) A small fraction of a large amount created an awful lot of lead pollution in some of the poorest and densest parts of Los Angeles County.

Would we repeat our lead recycling environmental mistakes with lithium batteries?

Start with some regulations that force industry to take action, even if it is expensive today:

The new US-Mexico-Canada Agreement (USMCA) on the North American auto industry has a 2030 requirement of 75% locally produced content, and use of recycled battery materials could help North American EV manufacturers achieve that.

The Canadian firm Li-Cycle will begin constructing a US $175 million plant in Rochester, N.Y., on the grounds of what used to be the Eastman Kodak complex. When completed, it will be the largest lithium-ion battery-recycling plant in North America.

[The articles don't say which process they are using to recycle the batteries.  But, I notice that both plants are near large quantities of water.]
We need to build a lot more of these plants throughout the world. We need to pay attention to make sure that they are built and run safely for both the workers and the surrounding areas. But, this is an encouraging sign that we are getting serious.
Posted by badmomgoodmom at 13:50 4 comments: