Warning! If you are under eighteen, stop reading immediately.
Some of you may remember my neighbor of the monster truck. I used to wonder how 3 very young men could each own a monster truck and yet never seem to go to work. The police blotter in our local paper said that the wheels were stolen off of one of the trucks and replaced with cheaper ones by thieves one night. Estimated value of stolen item, in excess of $5000. Where did these guys get their money?

When they moved out, their former next door neighbor enlightened me. It appears, that the three young men worked in the adult entertainment industry. It must have been very lucrative. So the truck and license plate holder was a statement of professional pride, akin to a BMW sporting a "UCLA MBA" license plate holder.
Posted by badmomgoodmom at 12:44 No comments: 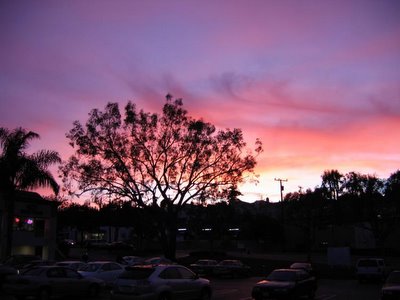 I looked up from the checkout counter at Rite-aid and saw this sunset today. When I got back to the minivan, I propped my elbow on the roof rack and snapped a few pix. Sometimes, I take a few extra seconds to look around and notice beauty around me. It makes me wonder how many times I miss it while rushing .

I am currently reading Fred Hoyle's autobiography which I find difficult to put down. The part where he recalls how he figured out what adults meant by time is especially interesting.

We played Jenga last night and discovered that Iris is a ringer at this game. I also a great deal of time with her today because her school is shut down for MLK day. We dropped off some overdue library books, posted a letter to my mom, went to get allergy shots, then met friends for lunch at Nyala Ethiopian Cuisine. We talked for two hours while the kids played hide and seek around the (very kid-friendly) restaurant.

Afterwards, Iris and I headed over to LACMA to see the Pisarro and Cezanne show that closed today. On the way home, we swung by the Rite-aid where I took the top photograph. This reads kind of like one of those "36 hours in X..." travel articles. But we managed to do this in just over 6 hours. Whew!

If you missed the exhibit, you didn't miss much. I bought the audio tour for both of us. That usually keeps her amused enough so that we can enjoy the exhibit (3 hours at the Vatican museum last year!) But the audio tour today was so insipid, that both of us were bored to tears and stopped using them halfway through the exhibit.

I also noticed that schools, libraries and post offices were all closed today in observance of MLK day, but the meter maids were still out in force.

Digression
Using the roof rack of the minivan to steady my arm while snapping the photo today reminds me of the Nissan Xterra commercial where the Xers use the Xterra as a tripod on their backcountry ski outing. I recall the commercial was really annoying because of all the quick cuts that the MTV generation is supposed to favor. Come to think of it, I am a backcountry skier, MTV generation Xer. So the commercial was effective in that I (the target demographic) remember it. OTOH, it didn't get me into the Nissan showroom while car shopping. (Chiat/Day is paid for making memorable ad campaigns, not for selling cars.)

I didn't really mean to get into a jag about Nissan vs. Toyota. But, did you ever notice that the Nissan minivan commercials show nary a child? The Toyota ads had kids popping out of the windows. I think the Sienna tagline went something like, "Kids, raise your juiceboxes!". I read that consumer research showed that SUV-driving and minivan-driving moms have fundamentally different self-images. So Nissan tried to divorce the Quest from the kid-hauling function. People who wouldn't be caught dead in a minivan won't buy one just because of a "cool" ad campaign. But the same ad campaign might turn off buyers who do want a minivan.

More thoughts about minivans:
The Zen of Minivans, On Time and MPG, the Unbearable Vapidity of Hipness
Posted by badmomgoodmom at 18:54 1 comment:

I read this article in horror. I don't like to discover that I joined a trend. We signed Iris up for her own gmail account because
In the beginning, I used to email cute things that she had done or said to that account. After two hard drive failures, I also started to email photos that I would not want to lose to her account. Later, we used it to exchange email with babysitters to confirm times. Nowadays, we also use it for arranging play dates with other parents and to communicate with her teachers.

My husband is also a big fan of the separate accounts. Otherwise, I might need to check his email account and see how many orders he has placed at Deep Discount DVD.

My sister said she was surprised that I used a gmail invite for an email address for a baby. But, Iris is actually sending email to her playmates using that account. She also likes looking at the mail archives to learn about her past. It serves as an electronic scrapbook for her.
Posted by badmomgoodmom at 22:33 No comments:

In response to Maribeth. I guess I should make it clear that I objected to the tone of the article, not the people described in the article. In fact, the family described seemed quite nice. They didn't mention hipness. The reporter brought it up, and brought it up tastelessly. Very unhip.

I, too, like mid-century modern furniture. I have danish modern teak chairs in my family room. I rescued one from a dumpster while in graduate school. I received the other as a present from my inlaws who developed a taste for scandanavian teak furniture while living in Sweden in the fifties. I bought some vaguely asian fabric with elephants on it from the $2 fabric store in Bellflower, then took it to an upholsterer to have new cushions made. So I do decorate in a vaguely asian, modern esthetic. I just don't understand why someone would want their house to look like a museum. Why not buy furniture made by today's designers?
Posted by badmomgoodmom at 20:21 No comments:

The Unbearable Vapidity of Hipness

I just read another article about hip parents today. Such articles always feature people who proclaim that they did not lose their hipness when they became parents! Their baby furniture is inspired by mid-century modern classics! They dress their babies in t-shirts with hip, knowing references!

They doth protest too much.

I drive a minivan and I am not one bit embarrassed about it. In fact, my husband tried to convince me to buy one before we had a baby. It seems, in his bicycle racing circles, minivans are de rigeur for several practical reasons. "Oh, come on. All the other guys have one."

The aforementioned article disses two very functional items that I used a great deal. The changing table is a real backsaver. (I used plastic bins on its shelves in lieu of a dresser so it took no extra floorspace at all.) The diaper warmer is one of those devices that we didn't ever imagine we would use. Some more experienced parents bought us one and we laughed when we opened the package. But, if you have ever put a cold wipe on a winter baby's bottom in the middle of the night, you know the worth of a wipe warmer. With a warm wipe, you can actually change a baby while keeping her half asleep. Try putting a cold wipe to a baby's bottom in the middle of the winter and leave me a comment about how well you slept that night.

Sure, the type of parents in the article "would rather take their vacations in Costa Rica than Orlando." I was horribly disappointed that my husband and daughter were not able to accompany me to Costa Rica this November. A Costa Rican family vacation does appeal to us. But, my kid has been bugging me to see a satellite launch and my husband has professed a curiousity about Epcot center. Hip or not, Orlando is in our future. 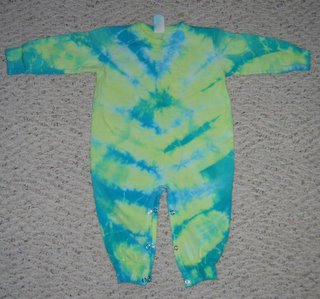 We held a tie-dye playdate in our garage during winter break. I am not sure if the kids or the parents had more fun. 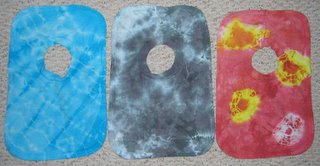 I made a few things for my SIL's newborn girl. She is a very long newborn and I bought a size that leaves her room for growth. The bibs from Dharma Trading Co. are the best cloth bibs around. They are large and thick so spills don't soak through. I threw socks into the ziploc baggies with the onesies for the full matchy-poo effect. 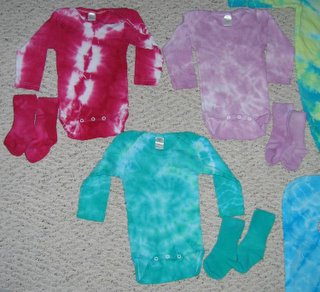 Two years ago, I made some bibs for my neighbor's newborn daughter. She liked them so much, she joined us to make some more bibs. The matching swirl t-shirt, socks and bucket hat ensemble is adorable. 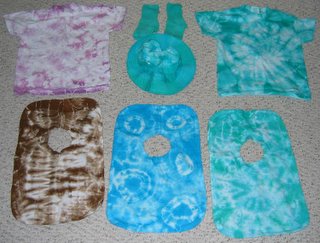 Posted by badmomgoodmom at 19:30 No comments: 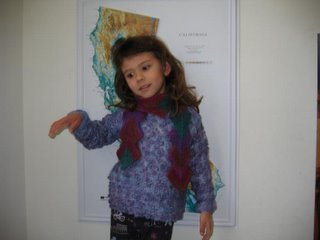 I promised myself that I would end 2005 with fewer WIPs than at the beginning. So, on New Year's eve, I was seaming up the blue sweater I started in Italy. The notes on how I made them with do it yourself instructions are on my sister's fiber arts blog.

While I am at it, here are two shop windows for some of my favorite italian products, yarn and cheese. 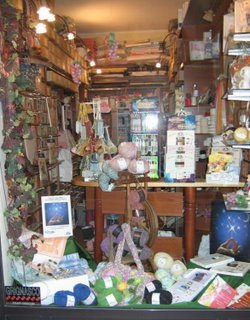 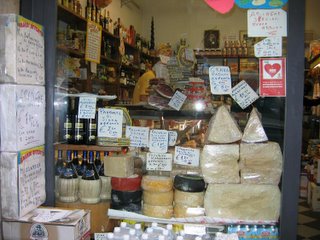 The town of Volterra really does look as pretty as a postcard. Even the satellite dishes look more stylish in Italy. 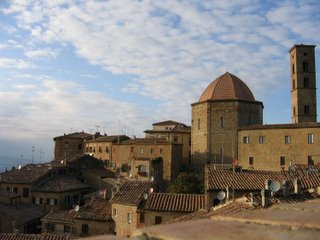 Posted by badmomgoodmom at 13:03 No comments: