Every heard about Vacancy Truthers?  They are people who deny that we need to build more housing. I hadn't heard of them either until I started attending housing forums to advocate for building more housing. Darrell Owens has written an excellent article about the Vacancy Debate.  Please read it. 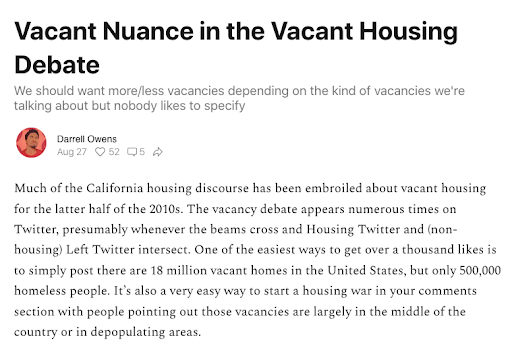 What is the right level of vacancy?  It was shocking (but welcome!) to arrive in Redondo Beach in the middle of a recession and have lots of apartments to choose from.  Housing seemed abundant, even though the vacancy rate wasn't over 10%.  It just felt relatively abundant because Bad Dad and I had become acclimated to housing scarcity.
It feels wild to read a paper about Homeless in America, Homeless in California by John M. Quigley, Steven Raphael, and Eugene Smolensky.  The 1990s seemed so long ago, and we can only dream about vacancy rates and rent to income ratios like this. 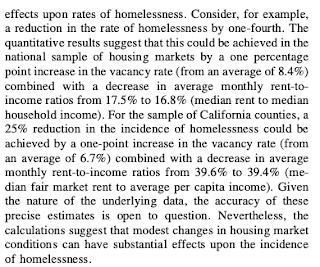 This paper was published in 2001 in Harvard/MIT's The Review of Economics and Statistics.  They analyzed the numbers from around the country to study homelessness and tested two hypotheses.  They debunked the hypothesis that homelessness was primarily caused by Reagan-era policies to close Mental Hospitals.  If this was true, then there should be a positive association between homelessness and patients released from mental hospitals in different cities and over time.  They didn't.
Instead, they saw the opposite.
They then looked at vacancy rates, rise in rents, and rent to income ratios.  Bingo, that's why California is a homeless magnet.  California is special because we have the most extreme housing scarcity.  For each increase in vacancy rate from an average of 6.7%, there would be a 25% drop in homelessness.  The opposite can happen.  If vacancy drops, conditions allow landlords to raise rents, and more people fall into homelessness.
Economists broadly agree that a 5-7% vacancy rate stops rents from rising.  Los Angeles' vacancy rate was 4.2% in 2017. 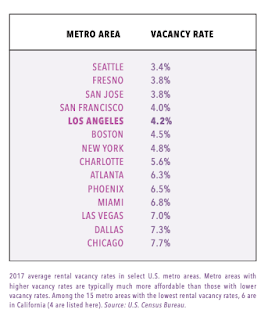 The rent is too damn high, which means that people on low fixed incomes (SSI, non-wealthy retirees, Section 8 voucher holders) cannot find housing that fits their budget.  This is why Redondo Beach has unused Section 8 vouchers.  My preferred policy choice is to make housing more abundant, so that the vacancy rate rises and rents come down.
California has made a different choice.  We seek only to staunch the bleeding, but not to heal the patient by bringing rents down.  In the 6th Round of the Regional Housing Needs Assessment (RHNA), cities only have to plan for enough housing to raise the rental vacancy rate to 5% and the owner vacancy rate at 1.5%.

There is no natural reason why for-sale homes have to be so scarce.  That's a policy choice to prop up sky-high home prices that are already unaffordable for most Californian workers. 1.5% still perpetuates rising prices.  The data since 2017 is even more grim.  California's owner vacancy rate in 2020 was 0.7%, which fomented bidding wars and home sale prices climbing at double digit rates in the midst of a pandemic.