The awful truth about Carbon Credits

I've long suspected that buying carbon offsets before flying is just greenwashing.  ProPublica performed the detailed analysis and it's even worse than I suspected. 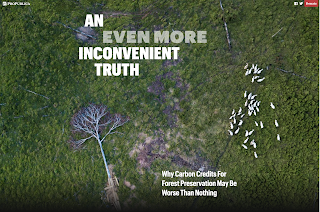 An Even More Inconvenient Truth by Lisa Song


The appetite is global. For the airline industry and industrialized nations in the Paris climate accord, offsets could be a cheap alternative to actually reducing fossil fuel use.

But the desperate hunger for these carbon credit plans appears to have blinded many of their advocates to the mounting pile of evidence that they haven’t — and won’t — deliver the climate benefit they promise.

I looked at projects going back two decades and spanning the globe and pulled together findings from academic researchers in far-flung forest villages, studies published in obscure journals, foreign government reports and dense technical documents. I enlisted a satellite imagery analysis firm to see how much of the forest remained in a preservation project that started selling credits in 2013. Four years later, only half the project areas were forested.

Lisa Song also touched on why I'm skeptical of Renewable Energy Credits (RECs), the sleight of hand that allows people to choose "100% renewable energy" 24/7, even when the sun isn't shining and the wind isn't blowing.  The illusion is causing real harm.


A 2016 report found that 85% of offsets had a “low likelihood” of creating real impacts.

Another global program, Joint Implementation, has a similar track record. A 2015 paper found that 75% of the credits issued were unlikely to represent real reductions, and that if countries had cut pollution on-site instead of relying on offsets, global CO₂ emissions would have been 600 million tons lower.

Almost all of the projects failed to meet a standard required for any true carbon offset called additionality. What it means is that the environmental gains are only real if the solar farms or windmills would never have been built without the credits.

The market for RECs is such a racket that I will save for another day.  My stomach is already hurting and I can't take any more grief today.
Posted by badmomgoodmom at 12:32 No comments: