I cringe every time I read someone call organic cotton sustainable.  It uses so much more land and water.  Natural dyes can double the amount of land required to produce fabric.

I know that I can never convert the die-hard purists, but they are probably not reading this blog anyway.


Organic practices can reduce climate pollution produced directly from farming – which would be fantastic if they didn’t also require more land to produce the same amount of food.

Clearing additional grasslands or forests to grow enough food to make up for that difference would release far more greenhouse gas than the practices initially reduce, a new study in Nature Communications finds.

I've written ad nauseum about how organic cotton uses more water, which is scarce in many of the arid regions where the highest quality cotton is grown, like in my home region of the US Southwest.  Irrigation with groundwater has left the soil so salty that crops can not grow.

(Alfalfa is grown in the desert because it will tolerate salty soil and water.)

Genetically modified cotton grows with half the water as organic cotton, and it can tolerate salty soil.  You can use the organic practices of crop rotation, cover crops and compost/manure and combine it with technology in a responsible way.

For instance, GMO Bt cotton manufactures its own protection against cotton borers and bollworms.  In fact, the higher the salt content of the soil, the more pesticides the plant produces.  Bt cotton is sold with and without resistance to Round-up.  Most of the seeds are sold with resistance to both, but that doesn't mean farmers are spraying Round-up willy nilly.

Most farmers are smart enough not to spray chemicals that they don't need.  If weeds are not a problem in that field in that year, then they won't spray.

Small-scale organic farm are laboratories where farmers can test novel ways to grow crops.  Scientists in labs can also develop and test new crops. Then we can combine the best of both approaches.

I read that only 1% of US-grown cotton is organic, while 15-16% (and climbing) are grown from GMO seeds and unsprayed.  It's sometimes sold as "clean cotton" or "better cotton" and purchased by IKEA and Uniqlo.

I read laments by younger sewists on blogs and Instagram that they are sorry they can't afford to sew with organic fabrics.  That saddens me.  We don't have enough planets for everyone to go fully organic.  But we can blend the best of organic practices with technology for a sustainable future for everyone--not just the rich.
Posted by badmomgoodmom at 10:40 No comments:

Climate Change: Sitting in the Dark

Northern California is about to go dark in a few minutes due to a Public Safety Power Shutoff (PSPS) according to the PG&E outage map. This was forecasted well in advance, but forecasting the exact timing has been difficult. The published anticipated power shutoff start times have been earlier than the actual shutoff times.

If you click on each colored outage circle on the map above, you can get more info along with another map of the affected area.  KQED made an easier to comprehend outage map and explainer. 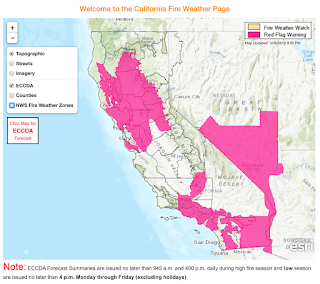 Just as "land doesn't vote" maps may give an exaggerated picture, I wanted to see how many people--not just land area--were affected. It turned out to be a lot, 587,252 customers for PG&E alone. Each household (customer) can have multiple residents. Assuming an average of 3 people per household, that's about 1.7 million people. UC Berkeley had planned to cancel classes in the event of a power outage.

[My kid asked me if we have an earthquake kit. My reply is that I had started to assemble one years ago, but I can't find it among the boxes from my last 2 moves. ;-) I'm going to buy some drinking water containers and put her to work finding and testing all of our headlamps. Do iodine tablets ever expire?

It's a good thing we never got rid of our landline. Copper wire landlines continue to work after cell phone batteries and towers run out of juice.]

The downslope winds are moving southward through California. Santa Ana winds will probably arrive tonight or tomorrow in southern California.

Check to see if you in a Southern California Edison (SCE) PSPS area.  So far, only 65 customers are affected.

But, 761194 customers may be hit by PSPS between PG&E and SCE. Add in San Diego Gas & Electric and potentially 2.5 million (out of 38 million) Californians may be sitting in the dark.

How did we get here? The answer is complex, but I disagree with this woman.  She was burned out of her old home in Paradise, CA, and now she's upset about a pre-emptive power outage to prevent another fire?


“I’m really mad at them,” Heart fumed. “We’ve had high winds in California for years and they’ve never shut down the power. It’s unconscionable.”

PG&E should “bury their lines, fix their lines, take the grid and secure it better,” she said. Anything but turning off the power to 34 counties throughout California, which she sees as a completely cover-your-butt move.

The climate is a changing and it is largely due to people who move out to the margins, driving a lot of vehicle miles. A hotter planet means drier vegetation, particularly later in the dry season. More people living out in the Wildlands Urban Interface (WUI) means more ignition sources and fuel for fires.

I mostly agree with the LA Times editorial board on this one:


It wasn’t PG&E officials who approved housing developments in high-risk areas. In fact, the utility can’t say no to serving those homes, no matter how great the fire risk. The utility also doesn’t make decisions about how the vegetation around their customers’ houses and the forests nearby are managed. Nor is it the utility’s fault that human-caused climate change has created conditions that fuel massive wildfires. That’s a disgrace we all own.

Some of us are more responsible for climate change than others. The people living out in the woods should not be pointing fingers at the poor transit-riding urban residents.  The urban poor are not driving, flying or eating beef-heavy "keto" diets.  The climate would not be changing if all of us lived like the urban poor.

The 4,952 residents of census tract 2117.03 in Los Angeles, California living in 0.07108 square miles are not as culpable as the people living out in the woods.  Yes, some of them do drive alone to work, but mostly because transit is in a death spiral (that we are working really hard on reversing.)  They took up driving recently so they can hold on to their low-paying jobs that they desperately need.  Moreover, they drive very few miles.  The Paradise census tract is remarkably similar in income, housing cost and building age.

The unlucky 5% potentially left in the dark live in urban clusters, as explained by Citylab:


But we're not just talking about cities here. The new figures represent the population in "urban areas," which the Census Bureau defines as "densely developed residential, commercial and other nonresidential areas."

Why should people who put up with the expense and aggravation (and also the joys) of urban living with a few million of their closest neighbors pay for undergrounding the utilities of a scattered few in the woods, at the expense of $3 Million per mile?  We'd rather spend the money undergrounding our own utilities.

We should not raise utility rates for poor people in Compton to pay for undergrounding utilities for the billionaires of Malibu.  The rich can pay to underground their own utilities.

I'm running out of steam here, but want to remind readers that Fire is a river that runs uphill. Don't move into a box canyon with only one downhill escape route.

Think about what it means to insist upon not spending a dime to improve fossil fuel infrastructure.  Suppose you were a mayor of a large city of 4 Million people and your own engineers told you to replace 70% of your fossil fuel power plants with renewable energy + battery storage but rebuild the other 30% of your power plants with new combined cycle technology so you can squeeze twice as much energy out of each molecule of CO2 emitted. What would you do?

The cheap, feel-good answer is to shut down all of your local natural gas power plants and take the photo-ops as a green mayor.  Then sign a 50-year contract to buy electricity from a new natural-gas power plant in Utah.

What happens when the inter-state electricity transmission lines are shut down for high winds?  We'll sure miss our local power plants then.

I recently read Vaclav Smil's Natural Gas: Fuel for the 21st Century? and call bullshit on a certain mayor. (His publisher took out the ? sign.  Smil examines the case for Natural Gas and is not impressed by the hype.) 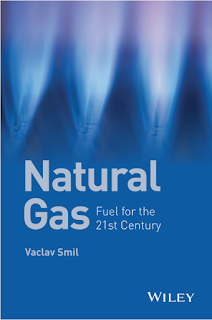 I'll be back later with more info about the differences between old and new natural gas power plants (they vary a huge amount in energy generated per unit of CO2) and natural gas production methods (super-emitters vs the best.)
Posted by badmomgoodmom at 21:32 2 comments: