I plotted up the temperature analysis to show how Boston--and pretty much the entire northeastern US--enjoyed a warmer Christmas in 2015 than Los Angeles.  Bad Dad pointed out that this is a junk graphic because everyone already knows this. 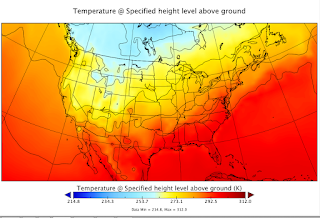 But, plot it up in polar stereographic, and it gets more interesting.

In fact, when I plotted up today's near surface temperature analysis in polar stereographic, you can see that the north pole almost got above freezing!  Moreover, it exhibits a wavenumber of 2. 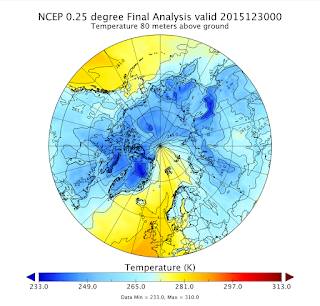 Posted by badmomgoodmom at 22:10 No comments:

November through December is a busy time of year for professional and personal reasons.

AGU's Fall Meeting is a professional highlight and capstone to each year, but preparing for it is stressful. I don't know why I thought it was a good idea to present my work to both the Geoinformatics and Education communities in different sessions.


With nearly 24,000 attendees, AGU Fall Meeting is the largest Earth and space science meeting in the world.

With 24,000 attendees, it's necessary to get over FOMO (fear of missing out). There is too much going on and you will always hear about some great talk or poster session after it has happened.

The large number of attendees meant that it was a great time to hold multi-agency meetings and get sh*t done.

I had some fruitful discussions with colleagues from NOAA, NASA and the Air Force lab I used to work at. This resulted in some much-needed ego-stroking ("I really like/respect what you are doing.") and even more work ("But could you also do this/that?").

This Spring, I will be giving an internal WIP (work in progress) talk, teaching "Data thinking before data crunching" at a Big Data workshop for graduate students, and helping to design/write a "Best practices for data stewardship" framework/document for data professionals.

This is in addition to my normal job duties.

After AGU, Bad Dad and DD usually drive from LA to SF for a weekend in SF and a few days with my mom.  This year, we had the added excitement of a hit and run driver hitting our Prius just after Bad Dad dropped DD and their luggage off at the hotel in downtown SF.

Fortunately, no one was hurt besides our car (damage 80% of resale value of our car).  Through the help of insurance and the amount we received for selling the car for scrap, we have a 2016 Prius V (station wagon).  Yes, we bought a car while we were on vacation so we could drive home.

My mom needed/wanted a new computer and phone.  So we added helping her purchase and set up a MB Air and iPhone to our to do list.  I'm so impressed with how quickly she was comfortable with the iPhone.

She said it was familiar because she took an iPad class when she bought one years ago and read the iPad for Seniors book the teacher recommended.  I'm going to look for a similar book for the iPhone and Mac OS X.

This is a long explanation for why I haven't sent out year end/xmas cards yet.  If I send something out between the Jewish and Lunar New Year, our holiday cards are on time.

A friend mentioned experiencing a 64 F Christmas day in Boston.  It may have been balmy in the northeast, but Los Angeles had a white Christmas.  Proof.

A few times in the last 20 years, we have woken up in our Redondo Beach home to see the snow-capped San Gabriel mountains from our north-facing windows.  We drove home after the rain/snow.  But there was enough snow on "the Grapevine", the pass between the central valley and Santa Clarita valley (in LA county) to suggest we missed that pretty sight.

We saw plenty of snow on the north-facing slopes, even inside the Los Angeles county line.

A colleague who studies waves said that mid-latitude quasi-stationary waves have a wave length that often result in anti-correlation between the east and west coasts of the US. That is, when one coast is hot, the other is cold, and vice versa. The hot/cold anomalies will see-saw between the coasts.

With climate change due to a melting arctic ice cap, this kind of behavior is expected to be more stationary. That is, the waves will see-saw less often and set up semi-permanently a la "the ridiculously resilient ridge". Scary food for thought.

Posted by badmomgoodmom at 10:49 No comments:

The inefficiency of philanthropy

The totals are in:


Colorado Gives Day broke yet another contribution record with 123,999 donations made during the 24-hour event, bringing in $28.4 million.

Colorado has over 5 million people, so that comes to less than $6 raised per person. How much social services does that buy?

Consider how many people now work in fundraising jobs compared to 40 years ago, when the tax rates were higher. Is professional flattery the best use of our society's labor?

Now compare the Colorado State Tax Revenues for 2013 (the most recent year I could find on line).

The state spends ~1% of gross collections on administration. In the world of philanthropy, anything less than 10% administrative & fundraising costs is considered excellent. 20-28% is more typical.

We are getting more than an order of magnitude of better value in our administration costs through taxation rather than volunteer philanthropy.

Posted by badmomgoodmom at 05:30 No comments: 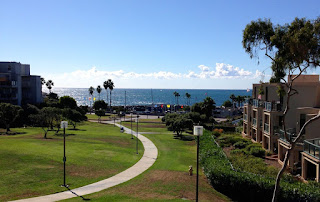 Posted by badmomgoodmom at 05:30 No comments:

I would like to publicly state that I find the whole idea of philanthropy distasteful for the reasons explained here.

Colorado's tax system is a regressive disgrace. I don't need this study to tell me. I felt the economic pain when I was a graduate student teaching three different 'preps' for $800/month and having to pay a higher tax rate than people earning much, much more.
Should you wish to participate in tomorrow's Colorado Gives Day, may I suggest High Country News? I like to donate HCN to high school libraries or science teachers because they do high-quality, in-depth journalism about issues that no one else covers.  Citizens need to get exposure to these topics as early in life as possible.  They will see things in a clearer light for the rest of their lives.

Yes, very few people actually live in the high country. But, this picture of the Colorado River Basin shows why people need to pay attention to the shenanigans in the small towns of the headwaters. 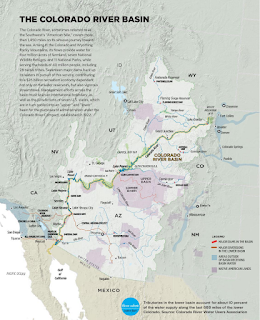 I'll come back to this picture later, when I have more time.
Posted by badmomgoodmom at 21:38 1 comment:

Waiting at the bus stop

This one is for Rose in SV, who misses the snow.
It takes a little bit longer to take the shuttle than to drive, but it is so much more relaxing, especially when the streets are icy.
See the difference artful cropping makes?  They say that Colorado has two seasons: snow season and construction season.  In central Boulder, construction never stops.

My office window faces S.  My condo windows face W, N and E.  So I enjoy a 360 degree view if you sum over my entire day.

PS, I am in SF December 13-19, 2015 for the 2015 American Geophysical Union Fall Meeting.  Anyone want to get together for food/shopping/culture on Sunday, Dec 13 or a weeknight evening?  I'm staying downtown but can meet anywhere I can get by public transit.
Posted by badmomgoodmom at 16:05 1 comment:

Colorado Public Radio ran a lovely story this morning about Linda Ligon of Thrums Books*.  Linda travels around the world to learn about 'endangered' forms of traditional needlework and the women who make them.  Listen to the story and view a slide show of some of the places she's been.

She's right in her observation that most of her interviewees want a 'better' life for their children that does not involve making needlework.  These art forms will die out unless we provide a market where people can make a good living doing this.

I first became aware of Afghan embroidery when I saw the Common Places show of Afghan embroidery at LACMA. The Italian artist Alighiero Boetti employed a similar tactic to the researchers at the Fowler. Although, being a man, he used female intermediaries to meet the needlewomen that collaborated with him on the art work.

UCLA's Fowler museum has one of the world's largest collection of handmade textiles because their anthropological researchers would pose as collectors of textile art (which are usually made by women). Researchers would say that they will buy only if they are sure about the provenance; they must speak personally to the artist.

In many societies, women are not allowed to speak to outsiders. But, with $$$$ riding on it, the researchers were able to purchase access to interview subjects. Along the way, they collected some mighty fine textile art. See it on display on the UCLA campus!

* What?  You don't know what a thrum is?  Have you been living under a rock?
Posted by badmomgoodmom at 19:32 4 comments:

That was some windsday!

A couple of weeks ago, we had some wild winds up at the Mesa Lab.   The instruments up on the roof of the building recorded a peak gust of 94 mph!

Notice how the sustained winds (in red) were pretty similar for the last 3 events while the peak winds (in blue) varied much more widely?

The frequent high winds rattle and stress the windows.  The larger ones are prone to cracking and breaking.  My neighbor noticed the crack in his office window before the wind incident of November 18, 2015.

(The window in the mirror image office across the hall from this one cracked last spring.) 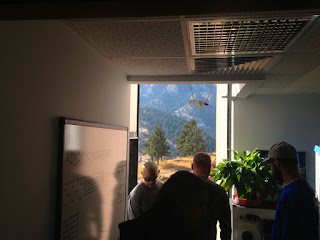 It isn't every day that you can see a paneless opening in your office building.

It took three guys on the inside and one guy on the outside to replace the window. 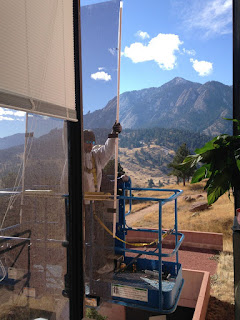 Some view!
Posted by badmomgoodmom at 05:30 5 comments: 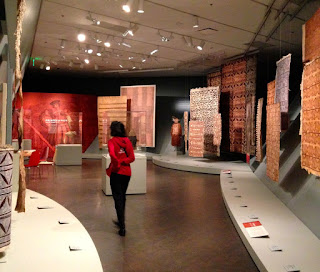 Posted by badmomgoodmom at 05:00 No comments: