Sometimes, I read something that makes me so mad, I dash off a quick email to a friend who gets it. This time, I sent it off to the entire LWVC googlegroup and got some 'attagirl' affirmations back. So, let's share this take down. 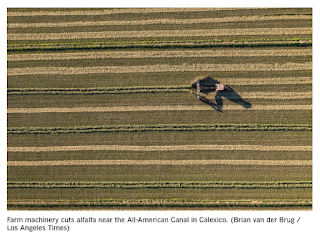 First, read These five people could make or break the Colorado River. Do you see what is wrong with this quote by one of the five people, Imperial Irrigation District (IID) commissioner J. B. Hamby?

Hamby also pointed to the huge amounts of water that are still wasted, in his view, in cities such as Los Angeles. "It’s very easy to point at the alfalfa field, but what about drying out the lawns and useless grass?"

The Colorado River (CR) is subject to all sorts of unrealistic math, well-documented elsewhere. We have these benchmark Colorado River allocations based upon 16.5 Million Acre Feet (MAC). Mexico gets 1.5 MAF, and the Upper and Lower Basin states get 7.5 MAF each.

California gets the lion's share. In the benchmark scenario, farmers, mostly the IID, get 3.85 MAF out of California's 4.4 MAF. The remaining 0.55 MAF goes to the Metropolitan Water District (MWD), who sells it wholesale to 19 Million urban users based on a system of rights allocated decades ago.  It's roughly a 70/30 split between farmers and urban users before water rights transfers. (Cities buy about 0.5 MAF of CR water allocations from farmers.) 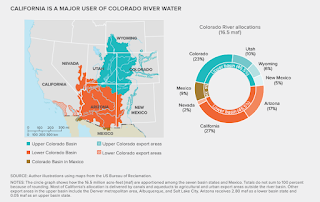 In practice, the CR does not have that much water and IID gets around 2.5-2.6 MAF and the cities get about half that, and then purchase more from farmers.

IID commissioner Hamby pointed to LA lawns in a rhetorical trick called misdirection. It's often employed by magicians so you don't look at what they are really doing.

Let's do the math!

If we take him literally, let's run the numbers for the City of Los Angeles' Department of Water and Power, LA DWP.

IID receives 2.5-2.6 MAF from the CO River. LADWP uses 0.5 MAF/year from all sources and serves 4 M people. An acre-foot serves 8 Angelenos for an entire year. (An acre foot serves 20 apartment dwellers in new, efficient homes!)
About half is imported river water purchased from Metropolitan. 0.25 MAF The exact mix of SWP and COR water each year varies based on availability, but figure half on avg. 0.125 MAF
City of LA residents are pretty water thrifty. About 1/3 might be outdoor use (perhaps 1/4). Not all of the outdoor irrigation in LA is lawns. Trees and shrubs are necessary to improve urban livability.
Even if it were all lawns, we're down to (at maximum) 0.125 MAF/3 or 0.04 MAF compared to 2.5-2.6 MAF for the farmers of the IID.
Anyway, finger pointing is a standard rhetorical trick to hijack the discussion. As always, verify. Does not pass the sniff test.
Hamby said some other whoppers, which I won't go into here until I finish some other work with real deadlines.
Posted by badmomgoodmom at 11:14 1 comment:

I got asked this again and decided to publish this as a blog post instead of in an email because this is such a common misconception.

First, read Vacancy Truths from September 2021 for background. There's a link to Darrell Owens' explanation about why home might be vacant and what we can learn from US Census Data. If a rental changes tenancy every 2 years, and it takes a month to clean/rehabilitate/lease out the rental. Thus, a 1/48 or 2.1% vacancy rate can mean essentially no open homes available.

As housing stock gets older, it takes longer to rehabilitate the units. Supply chain issues are also increasing the amount of time it takes to build new homes or spruce up old ones.  It's not unusual to spend 2-6 months remodeling. A major SoCal developer announced to investors that home building is taking 6-8 weeks longer due to lack of materials and/or workers, citing kitchen cabinets as a major pain point.

The particular question from yesterday was from new homes in Pasadena, CA. She was sure that the new buildings in Pasadena are vacant and that developers get tax breaks to keep them vacant.

Intuit explains that there is no tax break for loss of income while a rental (or for-sale) home is vacant. A lot of subsidized homes are built with the Low Income Housing Tax Credit (LIHTC). Wait lists for subsidized homes are years (often decades long), so there is no difficulty filling the homes.  If there are people who need subsidized homes, and you keep LIHTC-financed homes empty, you lose your tax credits. No sane builder would do that. I checked the most recent HUD data on LIHTC units (nationwide data) and they had a 3.97% vacancy rate in 2019.

Darrell Owens has helpfully extracted US Census data from 2010 and 2020 for all cities in California and shared it in a Google Sheets.

This means that Pasadena added more homes than people in the last 10 years. This is not a failure in planning. This reflects the general trend of households (HH) trending smaller and older people staying in their homes longer, even if they don't need all that space. Younger people can't afford the single family homes (SFH) or don't have the down payments required to purchase SFHs or condos, so they end up living in the apartments downtown.

It's possible that some of the new infill homes in central Pasadena are vacant, but they may still be under construction (lack certificate of occupancy), rentals being readied for a new tenant, or be for-sale condos waiting for a buyer. (For-sale homes are vacant longer than for-rent homes.)

Let's look at the data from the SCAG Local Profiles for communities in the 6-county (Ventura, LA, OC, Riverside, San Bernardino, Imperial) SCAG region. I pulled these charts from page 12 of the Pasadena Local Profile, 2018. They are derived from building permit data. Some of them are rebuilds and do not produce net new homes. (Likely source of discrepancy between the SCAG and Census data.) Pasadena has done a better than average (for the region) job of building new homes in the downtown area. That is also why so many young people live there. New people (young people forming households, newcomers to the area) will flock to where the open homes are.
It may seem like there is a lot of construction, especially downtown, but it's a sampling bias. The City of Pasadena Development Activity Map shows building permits distributed throughout the city, but many of them are remodels or ADUs. The big construction projects are downtown, along major streets and freeways, because that is the only place cities allow them to be built. If we are driving around on the major roads (as most of our driving should be) we'll see more of the major projects. Explore the map; click on the orange dots to view data on each building site. 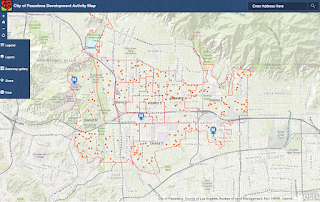 I checked Apartments.com and there are 164 apartments available for lease in Pasadena with next day occupancy (June 14, 2022). I checked Zillow and it shows 218 homes for sale and 152 for rent. I checked hotpads.com and it shows 279 apartments for immediate lease. Anyway, that's well under 1% of rental homes truly vacant, looking for a renter. Sounds like a very tight housing market.
Rate.com says that Pasadena has a 1.2% homeowner vacancy rate and a 2.9% rental vacancy rate. I found it informative to compare Pasadena and Redondo Beach. That "little old lady from Pasadena is real; 27% of Pasadena residents are seniors. But 25% are 20-34. 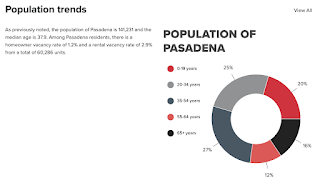 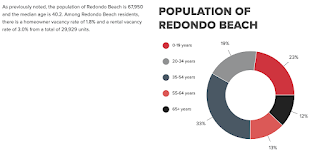 Pasadena has 53% working age population (20-64) supporting 47% elderly (65+) or youngsters (0-19) for a dependency ratio of 0.89. Redondo Beach has 44% working age population supporting 56%, for a dependency ratio of 1.27. If you don't provide for young people, then your children will have to move elsewhere, and that can socially isolate the elderly as they age out of driving. My home town of Redondo Beach is facing the Silver Tsunami with no plan.

Posted by badmomgoodmom at 14:24 No comments: