I vent sometimes on Twitter. Earlier this month, I ran a Twitter poll and learned how hard it is to write an unambiguous multiple choice question. 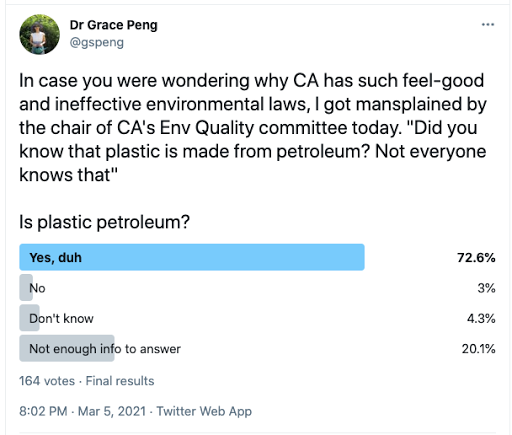 It's a good thing that I don't have to come up with a grading rubric for this question because you can make a valid argument that any of the choices are correct.

I started to write an explanation for the answer, but it became quite a long thread.  Since it took so much research and time, it deserves to be put up on the blog.

Until 2 years ago, I didn’t know that materials scientists consider plastic a property instead of a material. You can make plastic from all sorts of polymers that are soft when warm and rigid when cooled. Eg potato starch plastic. 2/
Most plastics used in the world are made from fossil hydrocarbons, typically ethane. It used to be made mainly from petroleum distillates but is now often made from fossil gas aka natural gas. 3/
Worldwide, plastics use is increasing alarmingly. We should question whether we really need to consume so much. But, in the US, our car dependence is a much, much bigger problem. Landfilled plastics are sequestered. Gas tank hydrocarbons get burned and add CO2 to the atmosphere 4/
4/ Quote Tweeted this AirQ thread about how CO2 is lower on weekends because people drive less.

I’m not a big plastic user and live in a community that supports reduce, reuse, recycling. Angelenos produce much less garbage than US avg. Many areas, including mine, haul away yard and kitchen waste for industrial composting. Our recyclables are collected, sorted and recycled 5/
The rest of our trash is incinerated at SERRF on Terminal Island, Long Beach. It generates electricity for SERRF and feeds the grid. The ports of LA/LB use a lot of electricity 24/7 so this is synergistic. My city diverts 74% of waste (typical for LA County) and burns the remaining 26% 6/
(Our regional solid waste stream is also smaller than the US avg due to state/local government policy choices. Our family also made lifestyle adjustments to reduce it even further. The main driver is that government policies support solid waste reduction.)
I’m still using a roll of Saran Wrap purchased 10 years ago. I used Parafilm in lab when I needed it. I have zero guilt about using plastic when I need it. Right now, my trash is full of takeout containers from local restaurants that need our support during the pandemic 7/
Try to reduce single-use plastics in your day to day life as much as you can. Carry that refillable water bottle daily, but keep a case of water bottles in your earthquake kit. The American Chemical Society devoted a special issue to plastics recycling 8/
In short, mechanical plastics recycling chops up the long-chain polymers and weakens plastic. So, the current methods of plastics recycling, where new and old plastics are mixed together, is not closed loop or sustainable. Eventually, the plastic will be too weak to do its job of holding stuff. You don't want a container that breaks unpredictably.

THE DYSFUNCTION OF PLASTICS RECYCLING Plastics recycling, as it exists today, is a mess. In 2015, the US recycled only 9.1% of the 31 million t of plastics that consumers threw out, according to the Environmental Protection Agency. The vast majority ended up in either landfills or incinerators. In contrast, two-thirds of paper, a third of metals, and a quarter of glass were recycled that year. In the European Union, about 14.8% of the roughly 27 million t of plastic waste was recycled in 2016, according to the European Commission.

But, there's active research into using enzymes to break down plastic back to its pre-polymerized raw feedstock shape. About 40% of it will remain, but it can be turned into low-sulfur diesel fuel--not a bad fuel for long distance trucking or ocean-going cargo ships which operate away from urban areas.
One of my husband’s former classmates at MIT is working on enzymatic fuel production from plastics and agricultural waste. I am optimistic about the technology, though it is still too expensive. 9/
Driving an ICE car is single use petroleum. Using plastic, even if it is incinerated after 1 use, gets 2 uses out of the material. If it is landfilled, it is at least sequestered vs burned and released into the atmosphere 10/
Gasoline accounts for 45% of US petroleum use while all chemical feedstocks (paint, solvents, cleaners, pharmaceuticals, plastics) account for 1.5% https://eia.gov/energyexplained/oil-and-petroleum-products/use-of-oil.php 11/ 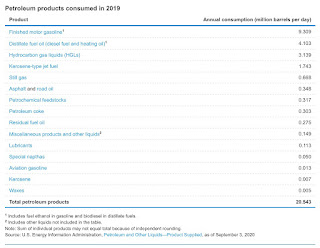 In summary, that smarty pants state senator is operating on old information. Plastics are made from a variety of sources & petroleum is one of the top 2. Plastics in waterways is a problem, but tire particles are the overwhelmingly major source 12/
[oops, I skipped 13/]
EVs, because of their weight, increases tire wear, exacerbating water and air pollution https://greencarreports.com/news/1127424_study-particulate-emissions-from-tire-wear-is-higher-than-from-tailpipes 14/
I wrote a detailed blog post about this 15/ Leaf blowers, street sweeping, car tires, fish and you
“Non-exhaust emissions...are currently believed to constitute the majority of primary particulate matter from road transport: 60% of PM2.5 and 73% of PM10.” https://tiretechnologyinternational.com/news/regulations/pollution-from-tire-wear-1000-times-worse-than-exhaust-emissions.html 16/
Under-inflated tires are a huge contributor to tire particles. Remember the Ford Explorer rollover scandal? SUVs are top heavy. To reduce rollover risk, they use special tires that don’t burst when inflated much lower than passenger car tires 17/
SUVs and pickups need larger tires, often at lower pressures, so they don’t roll over. Want to know why our regional PM 2.5 just keeps increasing? The answer is almost always cars, especially SUVs. Electric SUVs are greenwash. Electric bikes/trikes in every garage instead 18/fin
I'm not the only one who sees EV-only approaches without remaking our streets to help us move out of cars as greenwash.
Cycling is ten times more important than electric cars for reaching net-zero cities:

Tackling the climate and air pollution crises requires curbing all motorised transport, particularly private cars, as quickly as possible. Focusing solely on electric vehicles is slowing down the race to zero emissions.

Only getting out of cars will solve the urban particulate air pollution, road congestion and parking/land use problems. I said URBAN. Rural areas have different problems and different solutions. But, since California is the most urbanized of all US states and Los Angeles is among the most urbanized of all CA and US counties, this is what we need to do right here, right now, where I live.
10 Million people live in Los Angeles County, 5.6x as many people as Idaho. So I don't want to hear any critiques along the lines of this will not work in Boise or on my Montana ranch. The Netherlands has a bike culture with just 511 people per square kilometer vs 905 for Los Angeles County.
Sure, NL is flat and LA is surrounded by steep mountains. But that also means we live more densely because most of us live in the flatter broad valleys and coastal plains. Ebikes flatten the hills anyway.  It sure does rain a lot more in NL, though.
Followup 10/1/21
The US Department of Energy, who runs the National Renewable Energy Laboratory, started a new program to fund research in chemical recycling of plastics.
Posted by badmomgoodmom at 21:13 3 comments: