Housing is a third rail for California politicians and we have the dysfunctional housing market to prove it.

The issue is so divisive, that Russian disinformation campaigns are being developed to divide and paralyze us.  See this thread: 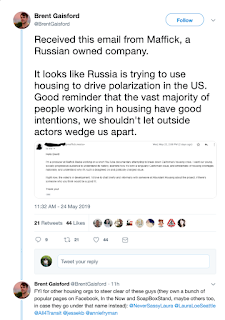 Where are all the workers going to live?  Elsewhere is not an acceptable answer.

Workers of all income levels should be able to live close to their jobs.

This saves workers time that they can spend on themselves and their families.

This fosters resilience in the face of disasters.  If awful things happen, they can still get to their jobs or home to their families.

This reduces the urban heat island effect because cars and road surfaces are a major contributor to localized heating.

When people use active transportation (walking and bicycling), their health improves.  This saves our whole society health care costs.

If parents work near their children's schools, they can be more involved, which improves educational outcomes for all.

WE NEED TO BUILD MORE HOUSING NEAR EXISTING JOB CENTERS.

It is not fair or just to keep cramming more apartments in already-dense minority neighborhoods while other areas near jobs are zoned only for single family homes.

BTW, SB50 was killed by CA State Senator Anthony Portantino, a Democrat from La Canada Flintridge and chairman of the Senate Appropriations Committee.

You may know La Canada Flintridge (LCF) as the home of Jet Propulsion Laboratory, but did you know that it is so expensive, that practically none of the scientists and engineers that work there can afford to live there?

Did you know that Senator Portantino's constituents emit about twice as much CO2 as residents in the dense core of Los Angeles?  Check out the CoolClimate Maps for the US and zoom in for Los Angeles. 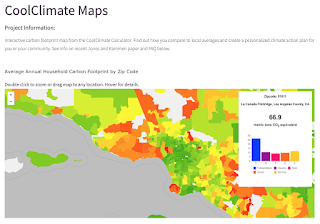 A main reason why they are so wasteful is because of the low density and high cost creates a mismatch between jobs and housing.  Thus, everyone has to drive long distances into and out of LCF.  The Density Map makes this nauseatingly clear. 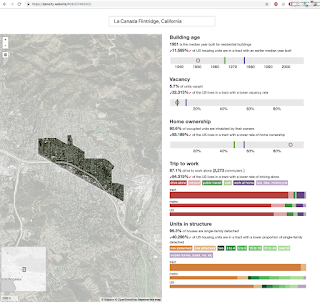 Now that I got this off my chest, I am off to bed.

Play with the Density Map.  It's a fantastically information-rich data visualizer.

The CoolClimate Maps are also cool, but their maps have more modeling assumptions.  Those are just best-guess averages based upon average consumption based on geographical data and income.  They are generally true, but not gospel.

Play with them in conjunction with the Racial Dot Map of the US.

If you are not mad after you explore the data in these three maps, I don't know how to get through to you.
Posted by badmomgoodmom at 06:00 No comments:

I'm heartsick about climate change and how it is caused by rich and old people while the brunt of it is borne by poor and young people.

I know that I sound like a broken record, but we cannot stop catastrophic climate change without fundamentally changing the way we live and get around.  Tinkering around the edges with electric (EV) and autonomous vehicles (AV) is simply a cynical diversionary stalling tactic.

The responsible people who are getting around in carbon-free ways are being murdered by automobile drivers and elected officials act like they are powerless to make our streets work for everyone--and not just people in two ton metal cages.


I'm heartsick about all the people killed and maimed by automobile drivers.  They are not auto accidents.  They are the entirely predictable outcomes of streets designed for auto drivers at the expense of everyone else and drivers who feel like shaving a few seconds is worth more than the life of another human being.

I'm heartsick that the number of deaths is growing despite every elected official pledging allegiance to Vision Zero. 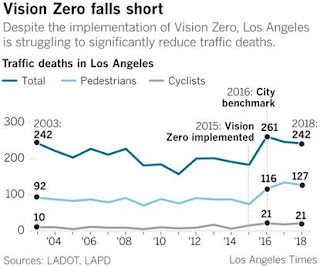 The carnage is endless.  See this and this in just the last month in LA.

The correct answer is no.

I want more money and public road space for people outside of cars and I want them now.

Posted by badmomgoodmom at 22:29 No comments: