The Deported US Citizen Children

Like most Americans, I have conflicted feelings about immigration rules.  Why do they criminalize some while welcoming others?  Yet, unchecked/unplanned immigration can overwhelm communities.

I got no answers, but I did read a couple of though-provoking pieces lately.  Perhaps you want to read them, too.

Posted by badmomgoodmom at 14:58 No comments:

Transgenic crops contain genes inserted from another organism with desirable traits.  For instance, Bt cotton and corn contain genes from Bacillus thuringiensis, a bacteria that commonly lives in soil. Cotton engineered with Bt can produce a protein that is toxic to the cotton boll weevil, which means that farmers don't have to spray fields with pesticides that target the boll weevil.  It also means that land and water don't have to be used to grow the biologically-derived pesticides that organic farmers rely on.

In the US, Monsanto sells versions of Bt cotton with and without resistance to RoundUp, a herbicide.  There are valid reasons to be suspicious of heavy reliance on RoundUp that are treated elsewhere.  Monsanto seeds are not cheap and may not be affordable for low-income countries.  However, Brazilian scientists have independently developed a Bt cotton, and I hope that will drive down seed prices.

Bt cotton is not a panacea as cotton is susceptible to pests besides the boll weevil.  However, farmers in both India and the US report a 75% or greater reduction in pesticide use.

Cotton is a thirsty crop.  When I started following GMO cotton news around 2005, GMO cotton used 30% less cotton than organic cotton.  That number is now 50% less.  Not only can GMO cotton be grown with less water, it can be grown with saltier water that is not suitable for other crops.  Water scarcity is the the largest problem for many farmers (intricately tied to climate change) so I look askance at anyone who markets organic cotton as the environmental choice.

I was heartened to read about Cleaner Cotton™ and Sustainable Cotton movements.  Farmers are growing GMO cotton and using integrated pest management and crop rotation to reduce the use of fertilizer and pesticides/herbicides.  It's not organic.  It's better than organic.


The cost to grow organic cotton in California is higher than brands are willing to pay. In organic trials that SCP farmers have run, organic cotton fields yielded as much as 30% less fiber than conventional. Cleaner Cotton™, on average, yields more than 1,250 pounds of cotton per acre compared to average yields of 925 pounds in organic production. Lacking a secure market, farmers are unwilling to risk the lower yields and corresponding decrease in financial return.

quince & co. introduced their Cleaner Cotton™yarn, Willet, in 2015.  It's a start, but it contained some infuriating misinformation.  I'm not referring to the lack of credit given to genetic engineering.

"California is home to the finest cotton growing land in the country" is a lie.  The SJV is a desert; that's why the land was cheap and did not already have boll weevils plaguing the areas that had previously grown cotton.  During WWII, the military needed cotton for uniforms and lacked manpower to deal with pests in the southeast, which did have the water to support cotton.

Cotton was planted in the SJV and irrigated with spring runoff from the mountains supplemented by fossil water in ancient aquifers.  Those aquifers are now so depleted, that the land has sunk 70-100 feet in 60 years of agriculture! It's time to retire the land and let the desert reclaim most of the southern SJV.

quince & co. also touted the family farm* that grows their cotton, Mari and Gary Martin of Pikalok farms.  They sound like lovely people, very concerned with modern farming and good land stewardship.  But there is no getting around the fact that their farm is in Mendota, a desert climate with only 9 inches of annual rainfall on average and as hot as a blast furnace in the summer.

Moreover, even at $8.50 per 50g skein, the Martins still rely on crop subsidies from the government.  Pikalok Farms received $4,214,481 in Total USDA Subsidies 1995-2017.  That's not including the water subsidies they receive from California.  They are small potatoes.  They received less than 1% of the cotton subsidies in their county over the same time period. 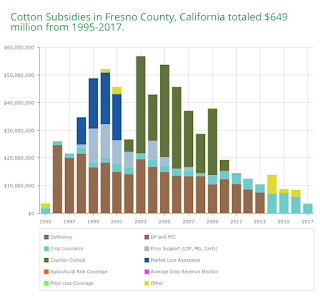 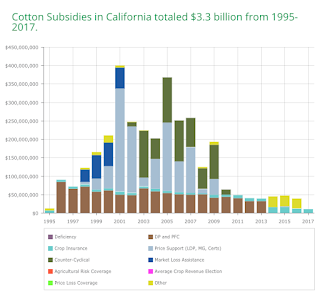 Just in case I've been unclear.  We should not grow cotton in the deserts of California ($3.3 B in USDA crop subsidies) or Arizona ($1.2 B).  Those industries were fed by war-time desperation for cotton and absence of boll weevils in the southwest.  Boll weevils are now endemic in the southwest as well, so there is no reason not to move cotton production back into the southeast.

Pests can be reduced by crop rotation.  GMO cotton, with lower water requirements, can be grown over a greater geographical range.  This also helps pest management.

Room&Board is now selling bedding made from cotton grown on a rain-irrigated farm.  The cotton is grown in Alabama, woven in South Carolina and sewn in Minnesota.


[Red Land Cotton] plant cover crops to reduce erosion and runoff, practice crop rotation and graze cattle on their land. All of this allows them to grow cotton without artificial irrigation—an exception to the norm among cotton farmers.

Farming is a tough and heartbreaking business and I think that some level of non-market support is needed.  However, we should be able to have rational debates about how much is appropriate and the best way to spend our collective money and effort.

When we talk about sustainable sewing, be prepared to pay more and to take a more nuanced approach to what constitutes "good" and "bad" production.

Since I've started tracking how much I buy and use, I've been buying 2-3x as much as I sew.  So it's time for me to use what I have and to recycle textiles when appropriate.  I'll still buy small amounts of new stuff to help create a market for responsible producers/sellers, but I will need to consume less.

*All farmers belong to a family.  Some families have small farms, some have huge farms.  There is nothing inherently wonderful about small farms, though they tend to be less efficient than large ones.


Posted by badmomgoodmom at 18:01 No comments:

Have you heard of the bullshit asymmetry principle (also known as Brandolini's law)?


The amount of energy needed to refute bullshit is an order of magnitude bigger than to produce it.

For example, Mark Jacobson et al published in 2015 with great fanfare that the US could meet all of its energy needs reliably with 100% wind, water and solar (WWS) power.  He further claimed that


No natural gas, biofuels, nuclear power, or stationary batteries are needed. The resulting 2050–2055 US electricity social cost for a full system is much less than for fossil fuels. These results hold for many conditions, suggesting that low-cost, reliable 100% WWS systems should work many places worldwide.
...
It uses a new grid integration model and finds low-cost, no-load-loss, nonunique solutions to this problem on electrification of all US energy sectors (electricity, transportation, heating/cooling, and industry) while accounting for wind and solar time series data from a 3D global weather model that simulates extreme events and competition among wind turbines for available kinetic energy.

It sounds fantastic.  Who wouldn't want to go all electric, including vehicles (we can keep our cars!), and produce zero green house gases without nuclear energy?

Many progressives, including Boulder's pro-municipalization* city council, latched on to Jacobson's results. It's a foundation for AOC's Green New Deal (GND).  The California Clean Power Alliance was formed to provide this magical 100% WWS.  Likewise, the City of Los Angeles hired a consulting firm to find out if it is feasible for LADWP to go 100% WWS.

Almost immediately, scientists raised alarm bells over Jacobson's methodology, assumptions and arithmetic errors. But it didn't matter, because bullshit, once it takes hold, is hard to refute.

It took a team of 21 authors a year to refute all the flaws in the original Jacobson paper; you can read Evaluation of a proposal for reliable low-cost grid power with 100% wind, water, and solar yourself.  The biggest source of disagreement is future availability of water for hydropower.  Christopher Clack et al found that 80% decarbonization of the US electric grid was possible at a reasonable cost.

Like climate science, there is broad general consensus.  It's basically Jacobson and his 3 coauthors against thousands of other researchers working in the same arena.  Clack's numbers are in line with the 75-80% of most other studies.  I have studied the issue and believe the consensus.

It got ugly. Letters and papers went back and forth.  Rather than letting peer review and the scientific method sort it out, Jacobson (who was losing in the science arena) took to the courts and sued both the National Academy of Sciences (who published the evaluation) and the lead author of the evaluation, Christopher Clack, in court for libel.

It was a nuisance suit, meant to bankrupt critics in order to silence them.  Thankfully, Jacobson withdrew the suit after much bad press.

How do we deprogram well-meaning people from repeating Jacobson's lies and dealing with the reality of physical science and available technologies?

It's late and I will deal with the flaws in the Green New Deal another day.  I want to make it clear, I support moving much faster than we have been doing to slow down climate change.  But the GND is not the best way to do it.  We can make some reality-based amendments to the resolution.  We can be a carbon-neutral and fairer society.  We just need to have rational debates on the actual merits of the science and technologies.

** Numerous California cities, including mine, moved all customers into the Clean Power Alliance so we can have the consumer choice of selecting 36%, 50% or 100% clean energy.  LOL.  It's done with smoke and mirrors and paper swaps of electricity source accounting that do nothing about our underlying electricity generating capabilities.

If you want to join me, you can opt out of the Clean Power Alliance here.  Beware, they make you take a push poll meant to make you feel like a monster that wants to scorch the earth just because you don't want to buy into their charade.


Posted by badmomgoodmom at 23:02 No comments:

Around 1,500 seals live on narrow Chimney Beach in Point Reyes National Seashore. Humans had claimed the much wider Drakes Beach, leaving the seals to live in crowded conditions that flood during high tides and suffer from dangerous rockslides. Humans had hired goons park rangers to scare seals away from the prime real estate unilaterally claimed by humans.

During the government shut-down, the beach was closed to humans and the goons were furloughed. Meanwhile, "high tides and storms battered the seals' normal habitat."  When faced with high tides and winter storms that washed away the already narrow beach and sent rocks tumbling from the cliffs above, the seals went looking for better real estate.

"So the seals showed up at the suddenly deserted Drakes Beach, and they brought friends and apparently family, too. Seals give birth during winter, and the unoccupied Drakes Beach appears to be an excellent place to raise pups."

Male Elephant seals are gigantic; they can reach 4.5 tons and measure 20 feet in length.  The females are diminutive in comparison but still much larger than other seal species.  They are quite aggressive when protecting their families.  TBH, they also have a strong odor.  In short, they don't make good neighbors.  Best to leave them alone.


You can view them from above in satellite view on Google Maps. 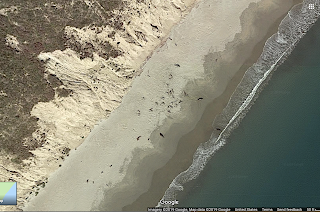 Don't buzz them with a drone camera, though.  That would be extremely rude.