Insomnia has its upside. I finished Jhumpa Lahiri's collection of short stories, the interpreter of maladies. I thought the title story was weaker than some of the others. When Mr. Pirzada Came to Dine really, really wowed me. It revealed an universal immigrant experience. Or maybe an experience peculiar to immigrants to the US of a certain age. (Lahiri and I are born a year apart and both immigrated to the US as young children.)
Posted by badmomgoodmom at 22:35 No comments:

Iris made and launched this today at the FOGE.org LA kickoff event. Each kid decorated and named their own rocket. The guy reading the launch manifest couldn't believe that someone would name a rocket 'Rosy Hearts' and read 'Rosy Heat' instead. Iris was not as upset about that as the fact that the rocket went suborbital.

She said that it was a fake rocket because it didn't go into outer space. And the rocket was so small, it could only lift an ant. She thought she was going to make and launch a real rocket. A witness said her rocket attained an altitude of ~100 ft at the apex of the trajectory.

I guess I could show her movie clips of rocket launches that went awry so she can see what a tough business getting into orbit really is. (This 4 year old thinks she can just draw a picture of a dress, pick out some fabric, and wake up to find a new dress in her room.) She has also never seen a rocket blow up or a space shuttle fall apart. But, I don't really want to puncture her bubble of innocence.

Maybe she will forgive me for all the time I am spending away from her and at work this summer. If all goes well, I can take her up to see not one, but two, satellite launches this winter for satellites I am involved with. My husband says that, with our luck, the launch times will be just as cloudy as the fourth of july fireworks at the beach this year. The launches are always videotaped from a jet flying above the cloud deck. Can he say that about the fireworks?

keywords: Iris, modern motherhood
Posted by badmomgoodmom at 21:40 No comments: 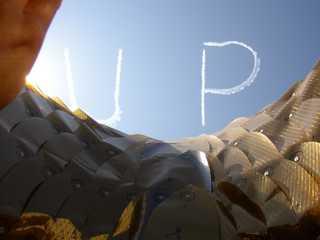 We made a trip out to Silverlake to see the golden vortex. I ducked my head inside and what should I see, but a sign in the sky.
Posted by badmomgoodmom at 23:05 No comments:

I got kicked off my sister's fiber arts blog. Or rather, she said that I needed to find some other home for my non-fiber arts musings. She suggested blogger as a good home for my digressions.

I picked 'Bad Mom, Good Mom' because, while straightening out my daughter's room, I found a drawing of the two of us inside a heart and the words, 'Bad Mom', written across the top. I guess I have been putting in too much time at work. I also came across the book, 'Good Cat, Bad Cat', in her room. In the book, the cat was chastised for behaving disruptively. Then a mouse appeared and the cat chased it. Suddenly, the cat was praised as a good cat even though it was behaving the same way as before.

It is comforting, that behaviors that garner censure in one context can also be desirable in others.

Translation
What I meant to say is that, when I am a bad mom, I am a good employee ("ideal worker") and vice versa. I just can't make everybody happy at the same time--work, family, self. I do the best that I can. 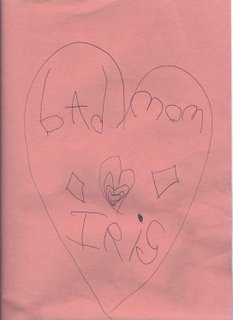 There is a bit more about me at Tagged, You're It!
Proof that I am a very bad mom in Mommy don't go.
Posted by badmomgoodmom at 22:27 4 comments: