We returned to Death Valley during wildflower season because my mom was so entranced with our pictures from last year. Alas, 2006 is shaping up to be a normal year for DV wildflowers. We did watch the sunrise at Zabriskie point.

I took the obligatory photo of the sun hitting beacon rock. 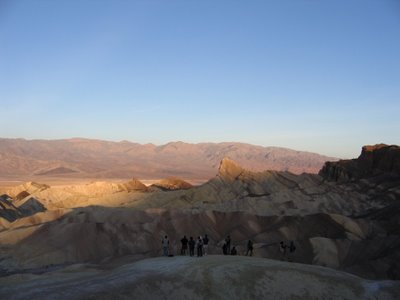 But I was more taken with the shadows on the alluvial fan to the south. 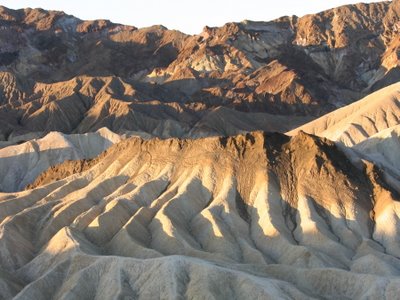 Then we stopped to say hello to the pupfish in Salt Creek. They were friskier than the dire newspaper articles suggested they would be. We lured Iris to walk the entire boardwalk loop with the admonishment, "Hurry up and see the pupfish before they go extinct!"

Saturday was very windy. We saw dust devils galore. People drove with their headlights on due to the poor visibility and our poor car was sandblasted. Of course, Mark said it was just as windy during the Death Valley Double in 1996. I think his memory is faulty. Yes, it might have seemed just as windy while riding his bicycle for 200 miles that day in DV, but they would have called off the ride if it was that bad. Just the same, I promised to look up the archival wind data for that day and Saturday to give him relative upper level wind strength.

Here is the jet stream analysis for the region about the time that the ranger station at Furnace Creek measured gusts of 51 mph. The upper level winds looked like they were about 175 mph over DV on Saturday afternoon. (Be sure to convert from UTC to PST.) 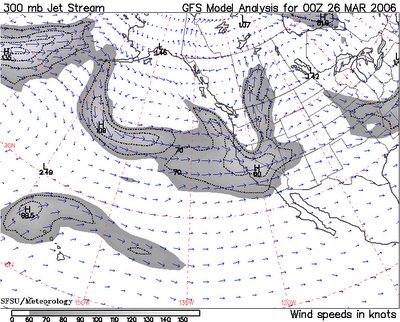