The October 23, 2011 LA Times business section ran one of their occasional "Made in California" series--this time, about jeans maker Adriano Goldschmied. Don't miss Premium denim maker AG Adriano Goldschmied has a leg up on rivals. One of the things that struck me about this operation is the quote:

With carefully designed cuts, all but 3% to 5% of the fabric is used. 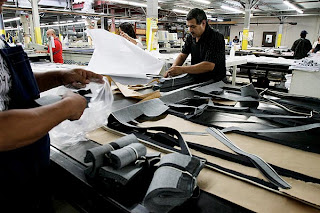 Look at how little is left after they cut the jeans parts! But is that really 3-5% waste? I like to think that I use efficient layout. What is my waste percentage? That weekend, I was making baby sweats from 1 yard of pre-consumer waste navy fleece. (You can see it, and other examples in Preconsumer waste fashion.) It was too late to weigh the total piece, but I weighed the cut pieces and the scraps leftover: This means my frugal cutting still generates 10 times as much waste as the AG factory. Additionally, at the factory, they can bag up all their scraps and send it to a textile recycler to be turned into household insulation, upholstery and such. I just toss mine in the trash.

I do toss my larger scraps into a large bin in the sewing room. Iris makes art projects and I sometimes piece together scraps to create larger pieces of fabric and make stuff from that. I will show examples in a later post. Improvisational quilt is an example.

I'd used scraps from the same fabric for one of my tops, too. 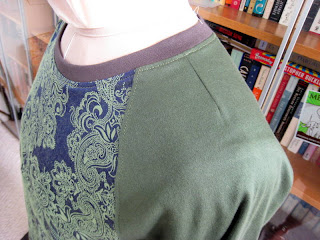 Do read the article and see the slide show. I found the photos of how they lay the fabric out on a long table under tension and then suck the fabric down to the table with a vacuum fascinating. That explains the little short ends of premium denim that I can buy for $1.50/pound a few miles from their factory. I don't know which jean factory they came from, but they are very good quality--not the stuff you see offered at Joann. 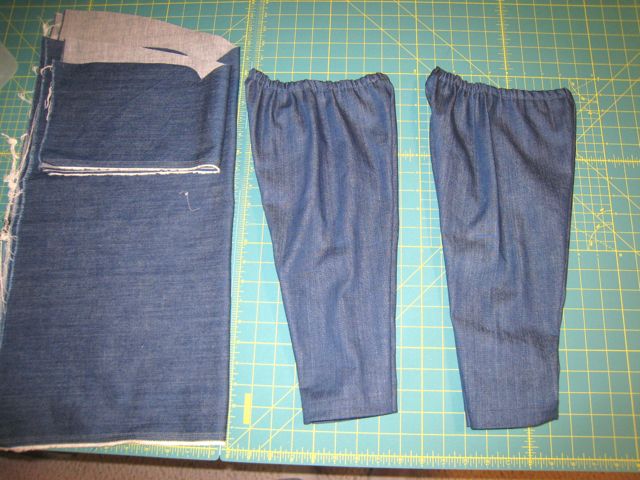 The NY Times also recently ran a story, Stone-Washed Blue Jeans (Minus the Washed). Note that lasers are used to "distress" jeans in both stories. Lasers can use quite a lot of energy, too. This is also done under an industrial-sized fume hood because the fabric outgasses quite a bit of nasty stuff. 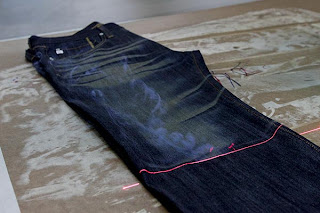 Why are lasers and fume hoods eco? Because the alternative, sandblasting, can give the workers silicosis. In this case, workers' deaths could be directly attributed. I suspect that many more are sickened until they are too weak to work. Their deaths may be attributed to malnutrition or tuberculosis at a later time. But they were weakened by producing our jeans.

Do you remember a time when we saved up, bought one pair of jeans a year (stiff as a board) and spent the summer weathering them ourselves until they were ready for the first day of school? Wasn't that fun? Did it kill us like the workers in the factories today?

Zero waste applies to not just fabric, but to people as well.
Posted by badmomgoodmom at 09:17