Bad Dad and I were featured in A Local Travel Network for the South Bay Story Map* riding my Ebike and an Escooter we bought for combining with transit just before the March 2020 lockdown. 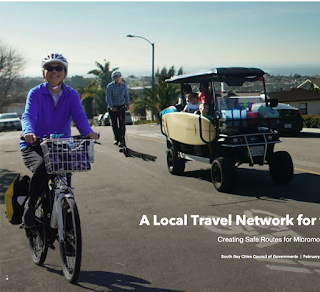 Click through to see the full wide picture that also includes a BMW electric car.  I have mixed feelings about this project.  I think it is a reasonable baby step, but the South Bay Cities Council of Governments does not appear inclined to offer more than sharrows.  In fact, their South Bay Bicycling Master Plan counts roads with 50+ mph traffic and a sign on the shoulder saying it is a bike route as a bikeway.
The Story Map makes some good points about the South Bay region of Los Angeles County.  This area is home to roughly 1 Million people and 750,000 cars. 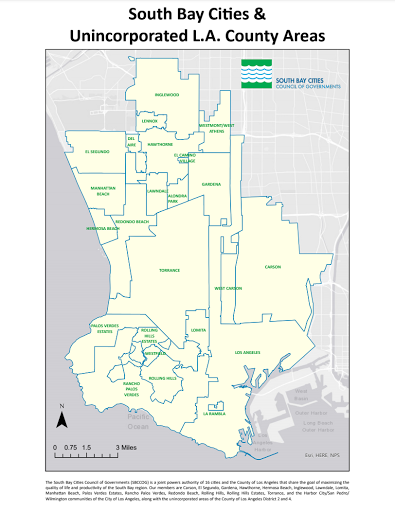 70% of South Bay trips are less than 3 miles, yet we do most of them by car. It's both a problem of habit and the built environment. We don't provide safe spaces for people out of cars, so people make trips in cars, even if they would prefer to do otherwise. Spend some time exploring pedestrian and cyclist data using UC Berkeley's Transportation Injury Mapping System. 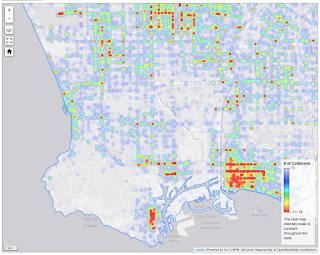 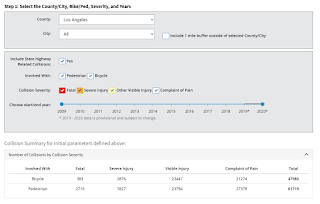 This is just the people that braved the streets outside of cars. This doesn't even represent the suppressed active tranportation trips that people took in cars or forwent out of (quite rational) fear.
I'll take allies where I find them.  I am accepting the LTN (if they actually build it) as a down payment, but not as payment in full, for the safe streets that we deserve and need as we decarbonize local transportation.
* We were told to be near the intersection of Pacific and 10th street in Manhattan Beach, CA one Saturday morning to film.  We bike through that area on our way to the beach several times a week.  It's one of the most expensive neighborhoods in the region.  The organizer wanted a quintessential South Bay setting with the ocean.  But, I would not have selected a neighborhood that aggressively protects Single Family Home Zoning to preserve the affordability of $30,000,000 ($30 Million) dollar homes.  We have to quit showing SFHs as if they are normal or representative. Nothing could be further from the truth.
Posted by badmomgoodmom at 14:36