This is a follow-on to Rooftop Solar Inequity or Net Metering Goes Grrr.  It was brought on by this hilarious inside joke Tweeted out by @BPBartholomew. 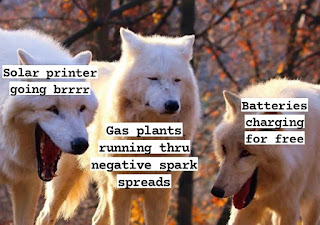 I had to ask him what "Gas plants running through negative spark spreads" meant. He clarified with another Tweet explaining how gas power plants can be ramped down to only the minimal amount needed to stay stable without shutting down. This costs them some gas and causes them to run temporarily at a loss.  Or they can be shut down completely, which reduces gas costs, but increases other costs. It's not an easy call. He and others coined the term "negative spark spread" to describe when plants run at a loss. 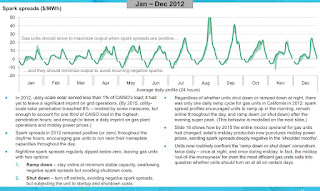 Why would a plant operator run at a loss?  It can make sense if the cost of restarting from a shutdown is too high in terms of money or time.  The entire system has to ramp up for California's evening peak demand.  If you don't, the grid frequency slows down and may even crash*.
For instance, the system had to add 13,671 MW over 3 hours to meet electricity demand the evening of Oct 12, 2021. That's a large amount to add over such a short time and California does this nearly every day! 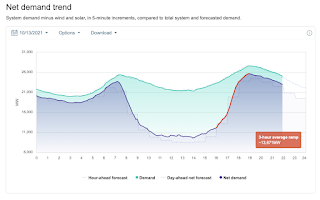 Net load is the difference between forecasted load and expected electricity production from variable generation resources. In certain times of the year, these curves produce a “belly” appearance in the mid-afternoon that quickly ramps up to produce an “arch” similar to the neck of a duck—hence the industry moniker of “The Duck Chart”.

Here's another plot from @BPBartholomew of the net load. 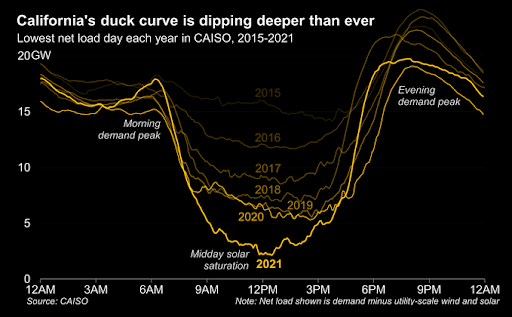 At midday, California electricity is mostly renewables, mainly from solar.  It doesn't matter who your electricity provider is or which energy plan you are on; we share the same grid.  In most of the state, including all the urban areas**; you are using mostly renewables at midday and mostly gas at night. The different energy plans that customers sign up for at the retail level is about shuffling paper Renewable Energy Credits (REC). That's a gross simplification but I'll explain that later in another post.
Don't take my word for it, stalk the CAISO supply website. Here's yesterday, October 12, 2021. The tall Green Hump is Renewables.  The Orange Duck is gas plants (of all types). The smaller Brown Duck is energy imports from other states. (Imports can be Solar from the east in the early morning, hydropower from the north, or wind power from the east in the evening.  Or it can be gas or coal from power plants east of us. 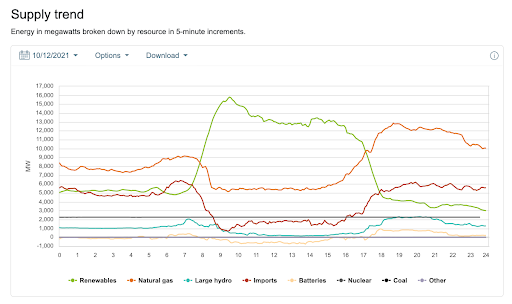 Note that large hydropower is not considered renewable for regulatory purposes (meeting California's Renewable Energy Portfolio Standard), but it is low carbon.  Nuclear is also low carbon but not considered renewable. CA only has ~2,000 megaWatts of nuclear power capacity since the San Onofre plant closed in 2012.
Renewables are further broken out on a separate plot.  Note that the day started out windy and then calmed down. Some clouds also rolled in. Geothermal is like nuclear, it hums along at a constant rate. 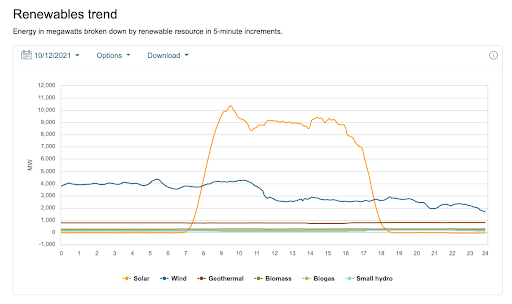 There are "Climate Warriors" that oppose interconnecting California's grid to those of other states because they have use fossil fuels than CA. That would mean losing access to hydropower from the Pacific Northwest, wind power from the Intermountain Region, and solar power from Nevada and Arizona.  The grids serving the western states are getting greener and an important driver is that new investments have a big market for new power coming online.
Anyway, micro-grids are important for resilience, but not feasible for year-round decarbonizing. There simply aren't enough batteries. We are building a great deal, but winter nights are long, the wind is intermittent (and NIMBYs prevent us from building it), and batteries rely on rare earth minerals that are rare and environmentally costly. Read Batteries don't grow on trees for more about that.

Decarbonizing the grid while keeping it running is so hard for many reasons, big and small.  I'm in awe that it works at all, much less works so reliably that we take it for granted.
A couple of years ago, the leader of the League of Women Voters of California's Natural Resources Committee asked me to serve as the Energy Team leader. That's why I've been reading so much about energy.  I've learned so much and still have so much more to learn. Should I blog more often about electricity? I'm not an expert.  Although I took graduate Electricity and Magnetism and passed my qualifying exams in E&M, it was my weakest subject in both undergrad and grad school.
* Remember when large parts of Texas lost electricity for days in February 2021? I read many accounts by industry professionals about how they narrowly averted a disaster that could have kept the state off-line for months.  AC, alternating current, has to be kept in a stable range of 60 Hertz. Texas' current dropped to 59.4 Hertz at 1:51 AM on Feb 15, 2021. This can damage equipment, which would take months to repair.
You don't start up a bunch of power plants and then blithely add them to the grid.  AC stands for alternating current.  You have to carefully hook up each generator to the grid such that their frequencies and phases are perfectly matched to the grids'. This is one of those invisible *very hard things* that get done all the time to bring us our comfortable lives.
** There are pockets of rural California near the Nevada border that are more tied to the Nevada/Reno grid and parts of far northern California that are better connected to Oregon. But we're all part of WECC, The Western Interconnection and shift energy to each other as needed.