You can engineer disinvestment in communities with weaponized zoning. Let me show you how it was done in my community. 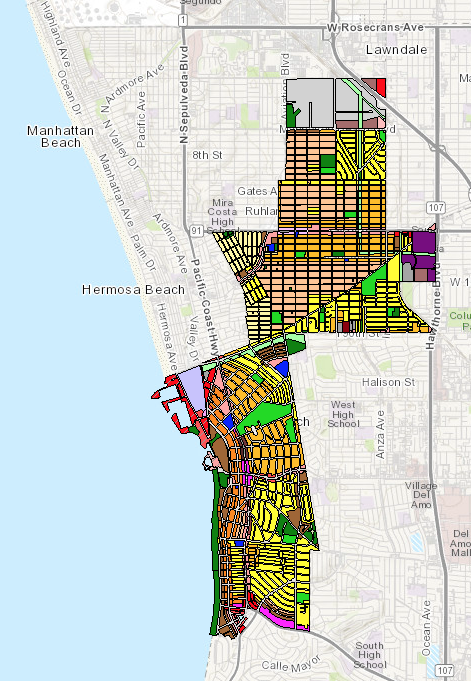 Let me zoom in on two sections, South Pacific Coast Highway 1, and Artesia Boulevard. According to the City's own Traffic Volumes Study, they get roughly the same traffic volumes, 29,000-39,000 vehicles/day (dark green). I verified it on the Caltrans Traffic Census Program website. PCH at Palos Verdes Blvd gets 30,000-33,000 vehicles/day while PCH/Torrance Blvd gets ~40,000 vehicles/day (blue). 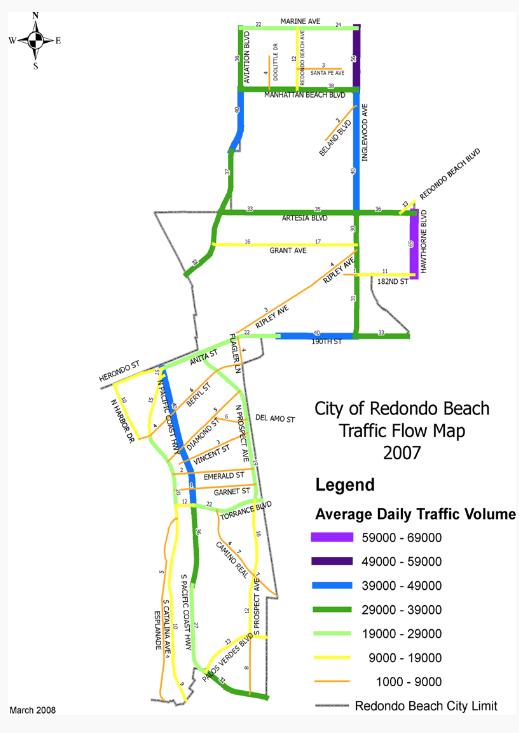 Artesia Blvd used to be CA 91 but the cities assumed control, so their traffic volumes are no longer measured and reported by Caltrans. I looked up a bunch of traffic studies on the Torrance, Lawndale and Redondo Beach websites and it looks like the RB section of Artesia gets about 35,000-40,000 vehicles/day.

Let's take a closer look at the zoning map in these two areas.

South PCH has large areas of Single Family Home R-1 zoning. It's low density by design. Yet, the commercial and mixed use areas along PCH from Avenue A to Prospect are all C-2-PD, C-4A, MU-3A. PD stands for Pedestrian-Oriented. Along the Artesia Corridor, the residential zoning is R3 or R2, 2-3x as dense as along PCH. Yet, the commercial and mixed use areas along Artesia Blvd are zoned mainly for lower-intensity MU-1 and C-2, with 3 blocks zoned at C-2-PD. 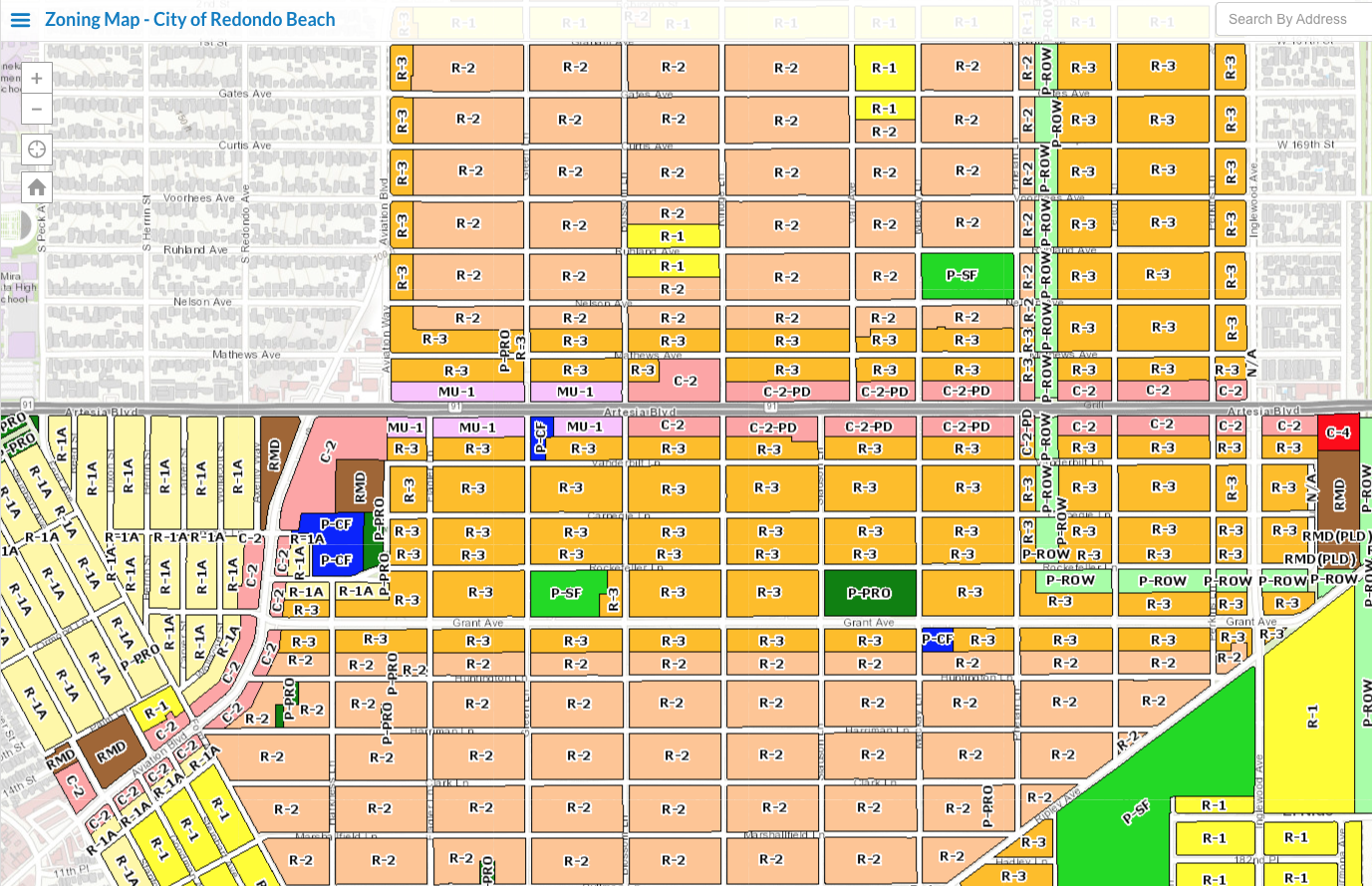 This guarantees vast moats of parking lots, and no new sit-down restaurants can be permitted. Look at the west end of the RB Artesia Corridor. The only restaurants are take-out or drive-through (blue boxes). Even the coffee shops, Starbucks and Coffee Bean & Tea Leaf must be drive-through.

Needless to say, walking through this area is dreary and hot, with all that asphalt. There is one sit-down restaurant, Las Brisas, that predates the parking ordinance and is allowed to operate. However, should they want to sell the place, and the new owner wants to remodel, they will be subject to the current rules.

According to the city's own 2019 study (Appendix A), existing uses along Artesia only have half as much off-street parking as is currently required. Yet, only 0-95% of that is used at peak times (except at 2 small parcels, where people park on the street or in adjacent lots). Here's the parking census at peak times. See all that green? That's 0-40% utilizations at peak. The rest of that time, the asphalt is mostly empty. 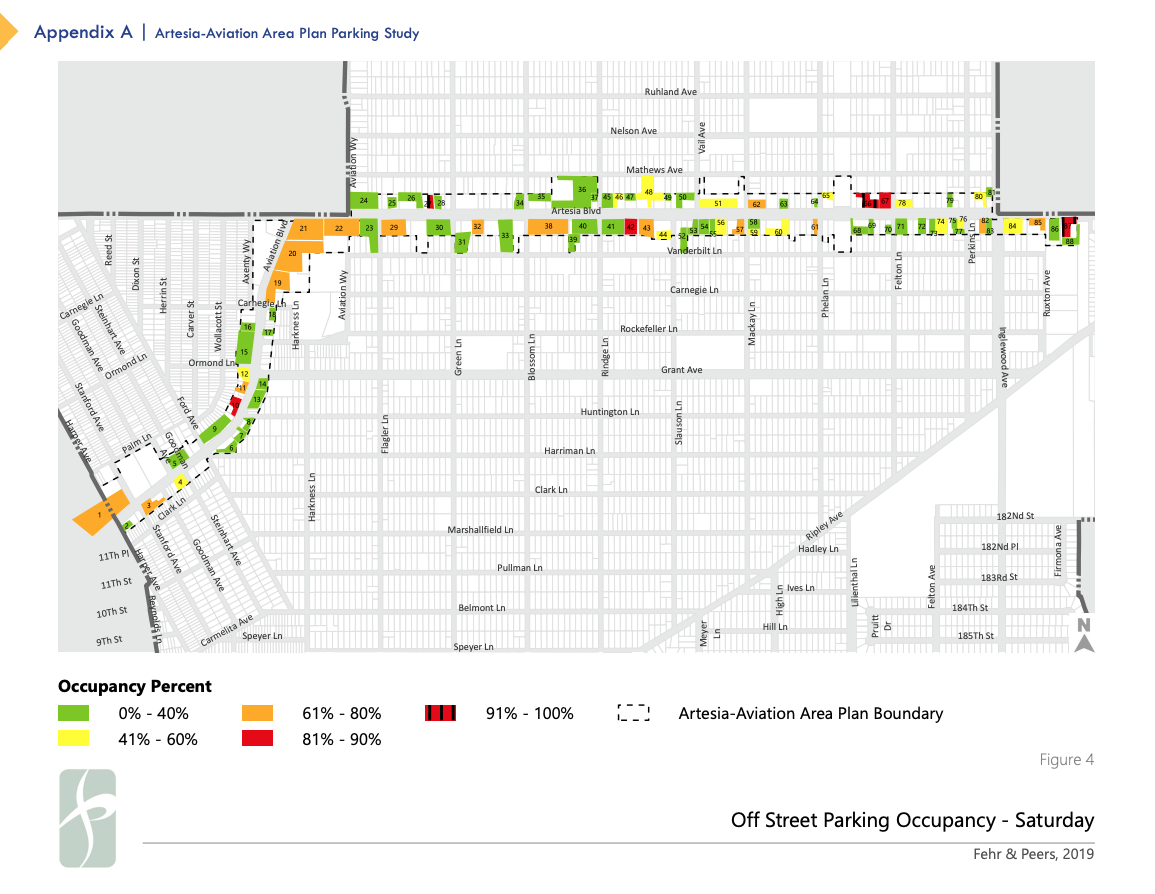 Donald Shoup explained in The High Price of Free Parking that 85% parking utilization is optimal for attracting customers in cars. Above that, people don't bother to drive there. Below that, they can confidently go with the expectation that they will find parking nearby.

It gets worse. A 2009 South Bay Sustainability Report showed that Artesia gets 67.4% of their visitors from within half a mile (walking distance) of the corridor while Riviera Village (South PCH area) gets only 31.7%. Artesia gets another 6.5% between 0.5 and 2.0 miles (bicycling distance) while South PCH gets none, 0%. 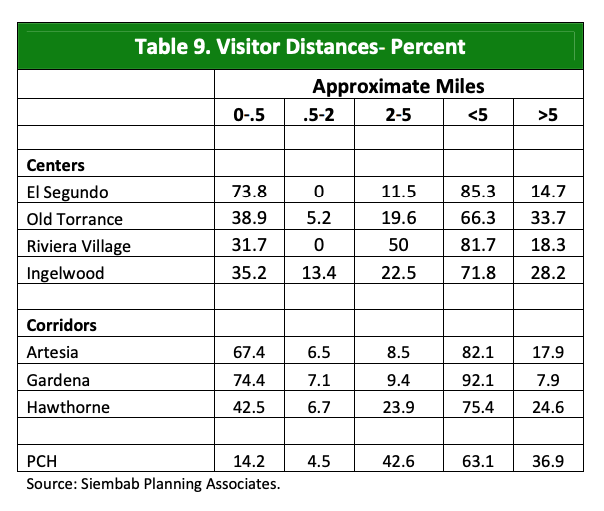 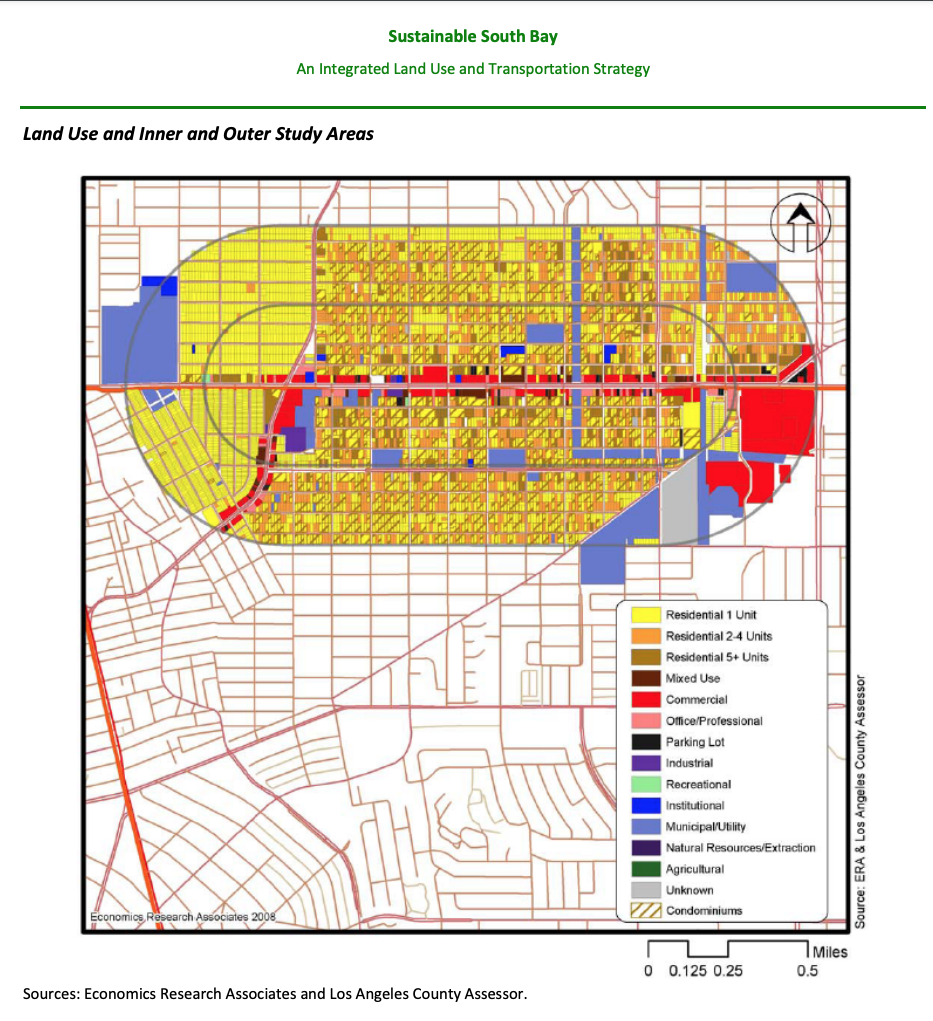 The Artesia Corridor leads the South Bay in percentage of dollar sales that come from people who live within walking distance, 38.5%. Riviera Village in South RB only gets 13.3%. 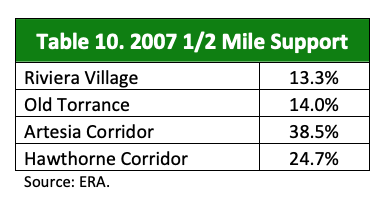 That was 2009. What's changed since then? Well, infill of R1 to R2 or R3 townhomes is nearly complete. The Artesia Corridor residential density is now 17,000 people/square mile, 2-3x denser than the R1 zoned areas of South RB. While SRB has the main library and post office, the smaller NRB branch libraries and post office are highly utilized. So are the grocery stores and pharmacies. In fact the Walk Score of this NRB mixed use development is 86/100, Bike Score 64/100. 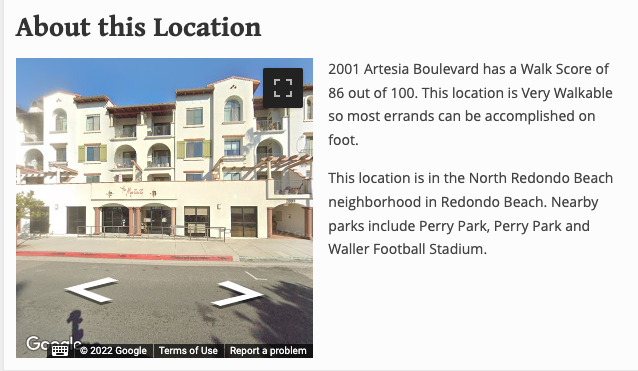 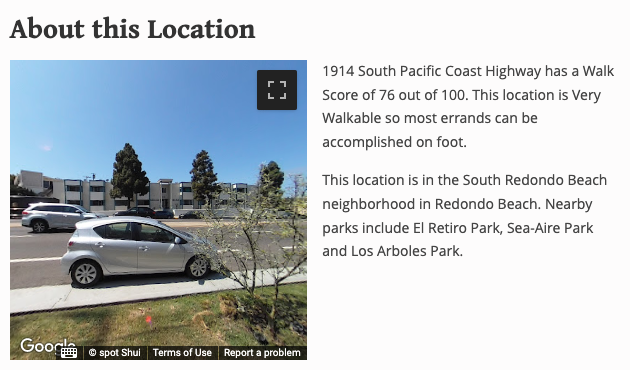 The HOLC "Redlining" map provides a clue. The Riviera area gets a Green rating due to Covenants that "Restrict ownership to the Caucasian race in perpetuity. All providers are strictly enforced." 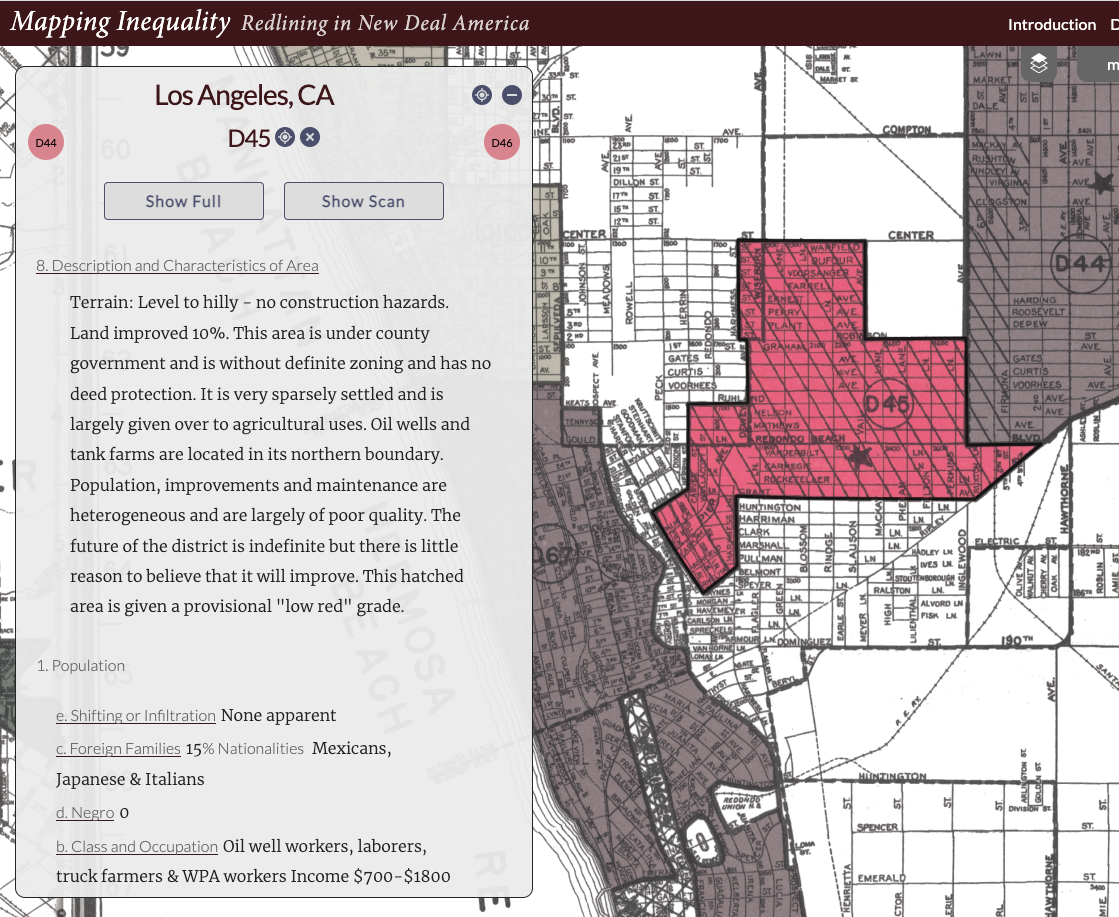 This is ancient history, right? These covenants have not been legally enforceable for 50 years.

It didn't happen by accident.

Zoning has become the proxy for race. "Preserving Neighborhood Character" and Single Family zoning restricts the number of new people who can move in. It also ensures that the new people who move in (if they didn't inherit their home) have to be very high bidders. Because whites have more net worth than any other group, the new people who do manage to buy there are much whiter than the general population. 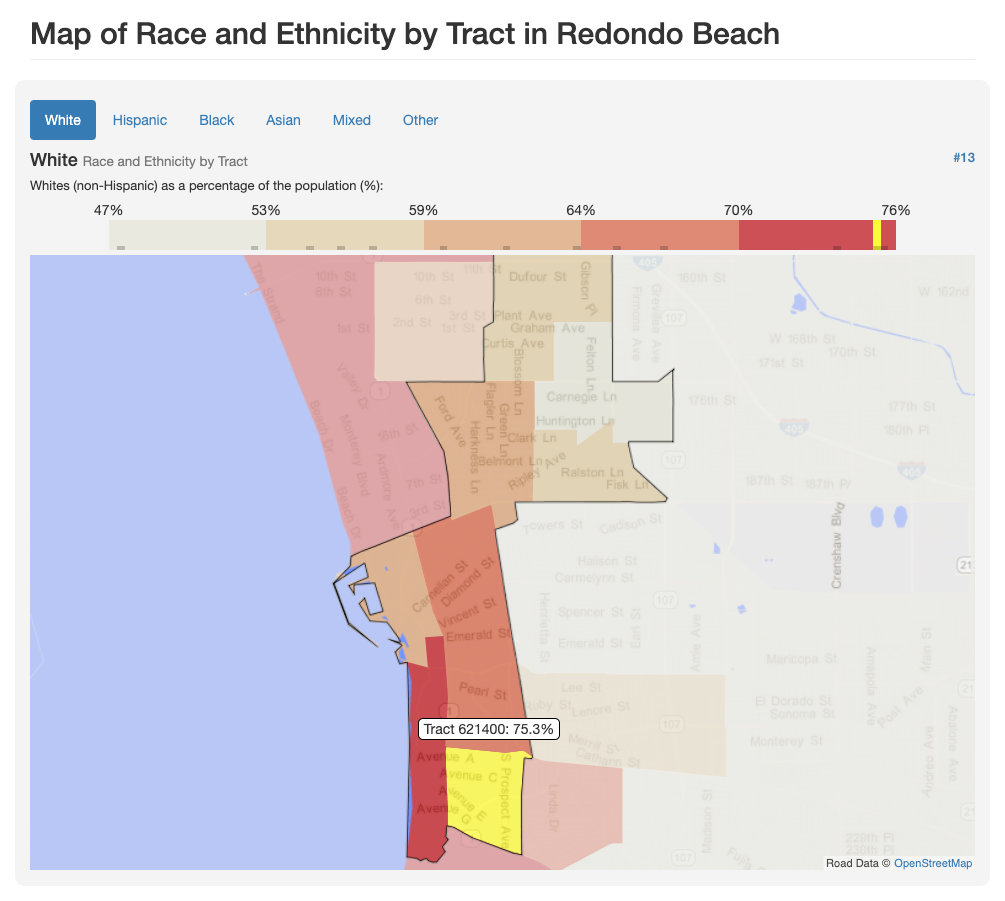 In contrast, the census tract containing the 2008 mixed use building on Artesia is 55.9% non-Hispanic white/14.6% Hispanic/16.5% Asian/4.4% Black/8% Mixed. This is more integrated than usual for a coastal Los Angeles County suburb. This census tract started out more diverse. Through infill, it was able to preserve diversity even as it gentrified.

The ratio between Blacks and Asians reversed in the last 25 years, but nearby Madison Elementary School has both a Title I designation (22% low-income children) and an annual multi-cultural potluck that is lit. The children live in homes where dozens of different languages are spoken. The school population is 34% non-Hispanic white/29% Hispanic/13% Asian/5% Black/15% Mixed.

[Note: I wrote about this building in New Construction Subsidizes Old; it has been called "a failure" by Mayor Bill Brand, who subsequently (with aid from some council members) downzoned Artesia so that nothing taller the commercial height limit is 1-story now.]

A 20-year old North Redondo Beach Business Association survey showed that the business owners along the one-mile stretch of Artesia, between Inglewood and Aviation, represented 20 different countries with many first-gen immigrants.

Which brings me back to Engineering Disinvestment. By requiring parking minimums that existing buildings don't meet, and forcing new construction to meet the new impossibly high standards, and then piling on FAR (floor area ratio) and height limits, the city can ensure that nothing "pencils out".  Nothing can be replaced. It will just slowly rot.

When business owners retire, the lot is their retirement fund. When they try to sell their lot, no one can pay very much. If the new owners modernize it, it would trigger the new zoning and parking rules. This is literally robbing these small business owners of hundreds of thousands of dollars on small lots, perhaps over a million on the larger lots.

Anyway, I may lament the lack of sit-down restaurants in my neighborhood, but at least I enjoy a 15-minute neighborhood where I can visit the library, post office, grocery, pharmacy, UPS/Kinko's, hardware store, and even a sewing machine store that sells high-end Swiss Mettler thread.
The shop owners that I depend on, though, are being robbed of their life's savings.

In the words of Frank Wilhoit (the composer):