Another senseless act of beauty 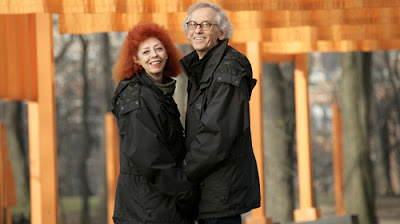 I am watching "the Gates", a documentary about Christo and Jeanne Claude's struggle to create a snake of 7,500 saffron-colored gates through New York City's Central Park. I really liked the part when Christo was asked if he was making a gift to the city after September 11. He replied that they were doing it for no other reason besides that they wanted to.

Read more about the 6-part HBO series in the LA Times.

I also like the observations of many of the onlookers. One said something to the effect that most people experience art for about 30 seconds. They can't do that with the Gates.

The Gates just go on and on. Drive-by art appreciation would be impossible. Isn't that great?

Aside:
I am at a meeting in Virginia Beach. My room overlooks the Atlantic ocean. When I walked in yesterday to my room for the first time, I was feeling road-weary and lonely. Then I looked at the ocean. Isn't it remarkable that I was walking along the Pacific ocean with my family on Saturday and, by Monday, gazing at the Atlantic?

It rained here today. I like to watch the rain, the wind and the ocean.
Posted by badmomgoodmom at 20:17