The rain gate has opened

5th graders in California study the weather. Not surprisingly, my 5th grade daughter and I have been talking about the weather on our walk to school in the mornings.  Last week, we discussed the difference between latent and sensible heat and how the increase of surface level moisture can mask the temperature signal of global warming.

I am not sure she got it.  I will have to figure out another way to explain that.

In the mean time, I want to better explain why meteorologists are so certain that Los Angeles will be hit by a series of heavy rainstorms for much of the week of Jan 18.  I could have said something about really complex computer models running on really humongous supercomputers.  But, in 5th grade, I will be happy if she understands some of the underlying physics.

Consider the jet stream, a fast-moving horizontal river of air at approximately the 300 millibar level (about 30,000 feet above sea level).  Bernoulli's principle explains that, where the air is flowing fastest, the air pressure is lowest.  It's a positive feedback loop because the jet stream sits over the regions of the lowest pressure and the pressure is lowest where the air is moving fastest.  It's like a mountain pass that allows the air to blow through--only this pass can move and change course.

Take a look at some satellite imagery overlaid upon a jet stream analysis.  See how the cloudy and stormy areas line up along the wind streamlines?  The cloudiest areas tend to be near the areas with the fastest jet stream winds.  This figure comes form the Naval Research Lab with the Navy's jet stream analysis. 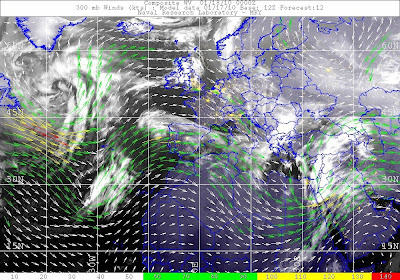 Check out the jet stream forecast for tomorrow afternoon.  [00Z or 00 UTC on 19 January is 4 PM 18 January because PST = UTC-8.  Click here for the time and date conversion.]  This figure comes from the California Regional Weather Server and is produced from NCEP data.

See how the jet stream will dip south and then turn northeast to hit the California coast near LA?  That weather pattern brings much more rainfall than the storms that come directly from the northwest because the air mass travels over the ocean first, picking up moisture.

In the early winter, the jet stream and our storms mostly come down the coast, from the northwest.  Sometime in the late winter or early spring, February on average, the jet stream dips south or the jet stream splits into northern and southern branches. (Imagine someone standing before a blue screen, mumbling something about the Aleutian low and the Pacific high; throw in ENSO and Madden Julian oscillation for good measure.)

Just remember that, when the jet stream moves southward towards southern California, the storm gate is open.

When that happens, the sea surface temperature (SST) becomes crucial.  The warmer the offshore water, the more moisture the air picks up before slamming into our coastal mountains.  As the air is forced upward, the air cools and the moisture falls out of the air--a process we call rain.

So what does the SST look like?  NOAA and the Navy produce global analysis charts of SSTs, but it is sometimes more helpful to look at the SST anomaly, the difference between the current temperature and the climatological mean for this time of the year. This figure comes from the Navy website in the link above.

Right now, the SSTs offshore from SoCal are warmer than average.  The jet stream analysis shows us that the stormy weather is going to blow to the south of us and then swing around to hit the coast.  The storm is going to travel over warmer than typical coastal water, picking up more moisture than a typical storm.

I already explained above why there is a tendency for the jet stream to be stationary.  The global weather models confirm that the jet stream will park over us for at least a week, opening the storm gate.  Furthermore, the air will pass over warmer than typical water before it hits us.

This points to a very wet and dangerous week in Los Angeles.  It's time to fill more sand bags!

Clarification:  Warm water doesn't necessarily bring rain.  That's why some El Nino years are not exceptionally wet years.  The air flow has to also pass over the warm water  for us to get large amounts of rain.  Drought-busting (and flood-producing) rains require both the right jet stream pattern and warm off-shore water.

Related posts:
Some links from the LA Rainfall series:
Posted by badmomgoodmom at 22:26