When I was browsing the web for spring dresses, I saw this page in Jenna's Picks. Commercial imagery like this, showing such intimate and unhurried moments between mother and child invoke a wistful response in me. But it doesn't quite manipulate motivate me to purchase the items because I know my life will not be like that if I purchase the stuff in the picture. 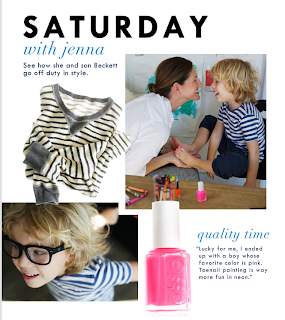 I digress. This is actually a post about pink nail polish.

I initially cringed because she is shown applying carcinogens and endocrine disruptors on her child. I know that this is commonplace in our society, but it doesn't make it any less harmful.

My second thought was, "Wow, that boy has chutzpah! He admitted that pink is his favorite color and agreed to model pink nail polish on the internet to further his mother's career." (I do hope his mother asked for and received his permission.)

In Color: A Natural History of the Palette, Victoria Finlay wrote that, a century ago, people used to dress their boy children in pink and their girl children in light blue. Somehow, the color association was reversed in the middle of the twentieth century. But I worried that the boy's school mates might not have such a long view of history.

Sure enough, the blogosphere lit up with the "controversy" over the pink nail polish. E.g. this superficial piece quoting these luminaries.

Erin R. Brown writing on the website of the Culture and Media Institute -- whose mission is to uphold traditional values -- says the spread “features blatant propaganda celebrating transgendered children.” She adds that “Jenna's indulgence (or encouragement) could make life hard for the boy in the future.”

“This is a dramatic example of the way that our culture is being encouraged to abandon all trappings of gender identity -- homogenizing males and females when the outcome of such ‘psychological sterilization’ [my word choice] is not known,” Psychiatrist Keith Ablow writes on FoxNews.com.

I think they are missing the point here.

The boy's manhood is more threatened by the high level of phthalate in the nail polish. Phthalate is a common ingredient in nail polish and an oestrogenic compound (a chemical that mimics estrogen) that can be absorbed through the skin or inhalation. Anything that mimics a hormone is an endocrine disruptor. See the NRDC explanation. Or read the NIH explanation.

In girls, phthalate exposure leads to earlier onset of puberty. It is also suspected of increasing the risk of breast cancer and implicated in many other disorders of the reproductive system.

This is how we know that child obesity is not alone responsible for early onset of puberty. If it were, then boys, as well as girls, would also be experiencing earlier puberty. But they are not.

Nail polish is more than just phthalates (up to 10% by weight). It's main ingredient is a carrier solvent--typically toluene--which is a carcinogen and neurotoxin. Actually, there are a whole bunch of dangerous chemicals in nail polish.

Look at the nail polish ratings at the Environmental Working Group's Skin Deep Cosmetics Database. EWG gives the ingredient list and safety rating of 584 nail polishes. Most get a moderate to high hazard rating. There are no safe mass-market nail polishes.

If you look at the bottle in the picture carefully, you can see the Essie label. A search for Essie nail polishes at the cosmetics database shows that all of the Essie polishes are rated 7 (out of 10) or high hazard. I looked at the Essie color chart and guess that this pink is similar to Bachelorette Bash, which is more hazardous than 86% of the nail polishes in their database. Read the ingredient list and follow the links to educate yourself about any of the chemicals unfamiliar to you.

Ablow, a psychiatrist and therefore, a medical doctor, should have been aware of the health hazards posed by nail polish. So why is he harping on the increased risk that this boy will need psychotherapy instead of his increased risk of sterility and cancer?

We can't remove every carcinogen, toxin and endocrine disruptor from our homes. We need some plastics. But we don't need to thoughtlessly expose ourselves and our children to recreational chemicals like nail polish.

This has serious national health consequences as we grapple with climbing health care costs associated with the growth of cancer rates in children, treatment for infertility and complications of fertility treatment (multiple births and increased incidence of cancer).

If we are to have any hope of taming the health care beast that is eating our economy, we have to quit doing stupid stuff.
Posted by badmomgoodmom at 22:07