In Praise of Nerds 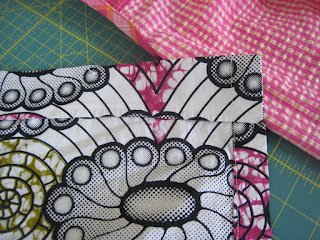 Last month, Iris and I attended an author panel at the LA Times Festival of Books called, The Nerds Shall Inherit the Earth.  It actually wasn't our first choice, but we could get tickets for it while the other one was booked solid.  I'm so glad we went.

I was expecting a rant along the lines of David Anderegg's Nerds: Who They Are and Why We Need More of Them. He had such a big chip on his shoulder about nerd-dom and I was not in the mood for a self-pity party.

John Scalzi started the ball rolling by describing the difference between a hipster and a nerd.  A hipster needs to assert his/her superior taste over the masses.  S/he must find the next new thing before it is discovered and "ruined" by others.

(Pamela Ribon added that, if a hipster discovers shared taste with someone else, they may take the attitude that the others are poseurs that do not actually understand or appreciate it as much as the hipster who originally discovered it.)

A nerd, on the other hand, is interested in bonding over shared taste.  A true nerd is thrilled to discover that someone else shares their thing.
He added that nerds owe a debt to the Gay Lesbian Bisexual (GLB) community, which made it socially acceptable to be unapologetic about not being mainstream.

Maureen Johnson piped in with the insight that, to be a nerd is to abandon fear of rejection.

They hit the nail right on the head.  For years, I've been bothered by the "hip" and "modern" labels used to describe motherhood or traditionally female arts done by young women proclaiming that "this isn't your grandmother's knitting".

Hip is an assertion of knowing more than the rest--the unhip.  "Hip and modern" is a denial of the wisdom and experience of those that came before us.  In my experience, motherhood is a journey into uncharted waters, where the outcome is uncertain.  To proclaim hipdom--that one knows better than predecessors--is the height of hubris.

[Note to hipsters:  Your grandmother was modern in her time and she was likely too busy paving your way to assert her hipness.  Think long and hard before you diss her like that.]

So let's bury hip-dom and celebrate nerdliness.  For example, check out how I clean finish the inside edges of Iris' and my shirts at the top.  It's all done with nothing more than a straight stitch--the kind of finish that your grandmother might have used.  It works, is durable, and feels much better next to the skin than today's serged seam finishes.

Or check out how I sewed smooth and even curves for the scalloped neckline on Iris' top*.   I want to be a nerd in the sense that I want to educate/convert others to share my skills and enthusiasms. 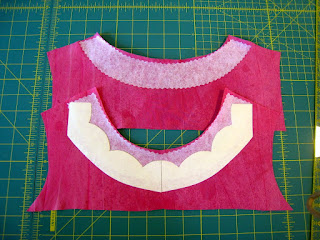 *Then check out this tutorial for how to turn the curve so that it remains smooth.  It's different than methods I've seen elsewhere on the internet and in books.  The difference is that this method actually works!

PS.  If you really want to geek out with a nerd, check out my sister's fiber arts blog.  She knits, she spins, she weaves, she dyes.  If you don't know the difference between a Z-twist and an S-twist, but want to learn, it's a great place to start.
Posted by badmomgoodmom at 17:23