In defense of Home Ec 3

I realize that Home Ec has become unfashionable in feminist circles, but it is historically important as a career path into science for so many talented women in prior generations.  Universities were willing to accept women in some departments only because they had viable career paths in industry working in food and textile sciences.

Make no mistake about it.  The nutrition science major at UC Berkeley is among the most challenging ones on campus.  Nutrition students have to learn everything required of biochemistry majors, take all pre-med requirements and then take nutrition classes on top of it.

I read in The Queen of Fats that the reason it took so long for other labs to replicate/confirm UC Berkeley's research in omega-3 fatty acids and cholesterol ratios was because no other food science department had access to the special centrifuges at Lawrence Berkeley Labs.  (They were a holdover from the Manhattan Project.)

Women who were interested in studying chemistry could sneak into their local universities as Home Ec majors and take everything that chemistry majors take.  Then they can apply at more enlightened universities further from home for graduate studies in chemistry.

Topologically-inclined women also studied Home Ec so that they could work as pattern-makers--an engineering discipline that pays much better than fashion design.  I was delighted to read that David Hockney's mother had been a pattern-maker in her youth.  I was less delighted when he wrote about how she was harassed into quitting by a colleague who was jealous/threatened by her superior abilities.  She continued to sew for her family.  When Hockney first sold a painting, he purchased a better sewing machine for his mom (along with more paint for himself) with the proceeds.

I've written about sewing and topology before, and will do so in the future, but let's get back to my intended subject.

I initially applied to graduate school to chemistry departments as a physical chemist.  I was particularly taken with spectroscopy and the study of reaction dynamics.  There is something so intellectually satisfying when you go from the micro world of quantum mechanics, compute the available energy before and after chemical reactions according to quantum rules, and then come out with a pretty accurate prediction for bulk reaction rates.  It's better than magic.

Science departments commonly fly prospective graduate students to visit in person after acceptance.  "Prospectives" receive schedules that provide time to meet with students and professors in their research field of interest.

My undergraduate research advisor, who had guided me through the application process, expressed surprise to see Dick Bernstein on my UCLA visit schedule.  He thought that Bernstein was no longer taking graduate students in preparation for retirement.  Did that mean they had to pad out my schedule because not enough active professors were interested in me?  Was that a bad sign?

No matter.  This gave me 30 minutes alone with the co-author of Molecular Reaction Dynamics and Chemical Reactivity and co-creator of Surprisal Analysis (the degree with which we are thermodynamically surprised by an experimental outcome).  I mean, who wouldn't want to spend time alone with someone with the imagination and humor to get IUPAC to accept Surprisal as an official chemical term?  Calculating surprisal indices is one of the funnest things imaginable.  But, it does take a lot of math and hard work in lab to get to the point where you can calculate one. 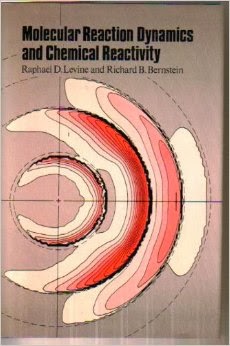 At the appointed time, I went to his office.  I asked why he was on my schedule even though he was winding down his research lab.  He said that my personal statement reminded him so much of his childhood, he wanted to meet me.  One of my science heroes wanted to meet me!

My personal statement was personal.  I broke the rules about not bringing any additional attention to my gender.  I wrote about staring out the window as a child and wondering why the sky was blue (common enough for spectroscopists).  But, I also wrote about learning to love chemistry in the kitchen with my first science teacher, my mother.  I learned about oxidation and chelation by squeezing lemon juice on bananas or in tea.  My mom told funny stories about her chemistry lab in nursing school and encouraged me to take science classes whenever possible.

His extended biography showed more parallels.  We both double-majored in math and chemistry.  His mother sewed and ran a dress shop.  And, we both puttered around in the kitchen with our moms, learning chemistry and being surprised.

I highly recommend reading both the extended biography published by the National Academy Press after a conference to celebrate his life and contributions and his NY Times obit.

You never know where Home Ec will lead you.  I'm certainly glad that it led me to meet this extraordinary man.
Posted by badmomgoodmom at 06:00