Diagonal Single Curb Cuts: I don't care if you live or die

I was walking home from the library and thinking about all the ways that my city doesn't prioritize people trying to make trips without cars.

Behold, the Single Curb Cut, set at 45 Degrees (on the diagonal) with respect to the crosswalks. It's hard to see underneath the car blocking the crosswalk. 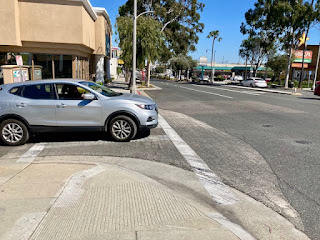 Here's the view after the car made a right turn right in front of me as I approached the crossing. If I were in a wheelchair, or using a walker or shopping (granny) cart to get to the grocery store on the other side of the crosswalk, I would have to step out of the marked crosswalk, make a 45 degree turn to the left, cross in the sidewalk, then pull out into traffic again to go up the other diagonal ramp. 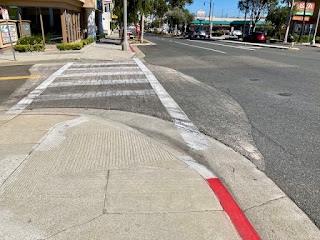 Notice the dark stain at the foot of the ramp? That's the damp spot left after the recent rain because the Diagonal ramp cut is a gravitational well at the intersection of two crowned roads. People who roll things will always be directed into a puddle with these kinds of curb cuts. 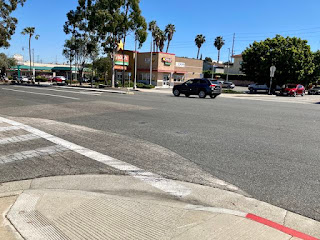 Imagine yourself in a wheelchair, trying to roll to the grocery store. You have to turn, roll yourself diagonally into the street, slowing yourself down so you don't roll off the sidewalk into speeding traffic.  After you stop yourself, you need to make a sharp turn to get into the crosswalk, then roll outside the crosswalk to approach the diagonal curb cut.
Turning slows you down, so you could be at a near dead stop. To get back onto the sidewalk, you have to push uphill starting from a dead stop in a low point. Now imagine yourself coming home from the grocery store, laden with food.  Do that in reverse with the extra weight.
At this intersection, there isn't even a marked crosswalk in the other direction; why direct the ramp towards the middle of the arterial intersection? Omission of a marked crosswalk and a traffic signal across this 35 mph arterial road (40,000 vehicles/day) means you want to suppress people from walking across the arterial at this intersection.  You've already decided to pay for only a single curb cut. So why not align it with the marked crosswalk?
Posted by badmomgoodmom at 12:15