In defense of Home Ec

I've made no progress on Capecho since 2007 because of an unfortunate meeting with the (then) new superintendent of our local school district. It was supposed to be a charm offensive but he made me so mad, I completely twisted up my Capecho and it's been sitting in a box ever since. 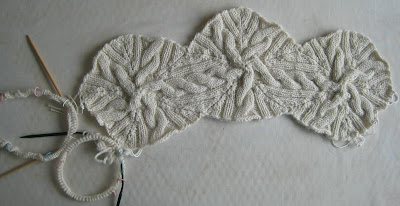 First off, why do EdD's go by Dr X when PhDs go by their first names?

He talked about the usual stuff like how he grew up nearby and he wanted to prepare our students for the twenty-first century economy.  He was aiming to send 100% of our high school students on to college.  As a scientist, my ears prick up at the mention of 100% anything.  What about the special ed kids?  Should we throw them under the bus (out of the district) lest they mess up our "metrics"?

To head off criticism, he clarified that his broad definition includes trade schools and vocational training at SCROC (Southern California Regional Occupational Center).  He suggested training at SCROC to be a medical assistant (average wage, $14/hr) as a viable career because of growing demand in the healthcare field.  He also proposed industrial shop as a good career due to the plethora of businesses of all sizes in the South Bay that make goods such as helicopters and satellites.  He praised the arts because of the contribution that it makes to our local economy*.  He finished up his spiel with a jokey, "In today's economy, Home Ec just isn't going to cut it."

Well, I just about choked right then, but I swallowed my anger and quietly knitted on.

There are so many things wrong with that statement.  Let me count the ways.

Why did he single out Home Ec as outdated?  It's hard .not. to see sexism in that statement.  Why train people to care for ever more patients sickened by lifestyle diseases if we could prevent the diseases in the first place?  What is wrong with teaching students how to cook healthily and economically at home instead?

Home Ec is the kind of cooperative, project-based, hands-on science training that educational pundits claim they are trying to bring into the classroom.  So why dump it?

I first learned microbiology from my Home Ec teacher when she explained how to safely store and cook food and why we needed to thoroughly wash our hands before and after food prep.

She had recently returned from a one-year exchange program in which she traded homes and jobs with another teacher in Wales.  She taught us a couple of Welch recipes and then sent us home to collect family recipes of our own. From those recipes, we compiled lists of common ingredients in different cuisines around the world.  (I grew up in a diverse suburb near San Francisco/Silicon Valley.)

The monotony of British and northern European recipes was an eye opener.  It made me so grateful for my heritage because my mom's recipes were so much more varied and tastier than those brought in by most of my classmates.

Then we investigated the geographic distribution of ingredients and the natural and human history of those ingredients.  In the process, we learned about weather and trade routes.  That was the first time I noticed how far north Ireland and Wales lie and how short their growing season is.  Most importantly, I learned about the Gulf Stream, that great conveyer belt of heat that makes life possible for such a large population at such a northerly latitude.

I learned way more science in Home Ec in the 1970s than my daughter learned in the parody that passes for science education today.  (California now requires all students to take science all three years of middle school.)  Today's watered-down science curriculum is so depressing, it deserves a separate post.

In homage to my 8th grade Home Ec teacher, who kindled and nurtured my interest in the natural world, I will post a couple of sea surface temperature analyses by NOAA/NCEP and the Navy/FNMOC.  Can you spot the Gulf Stream? 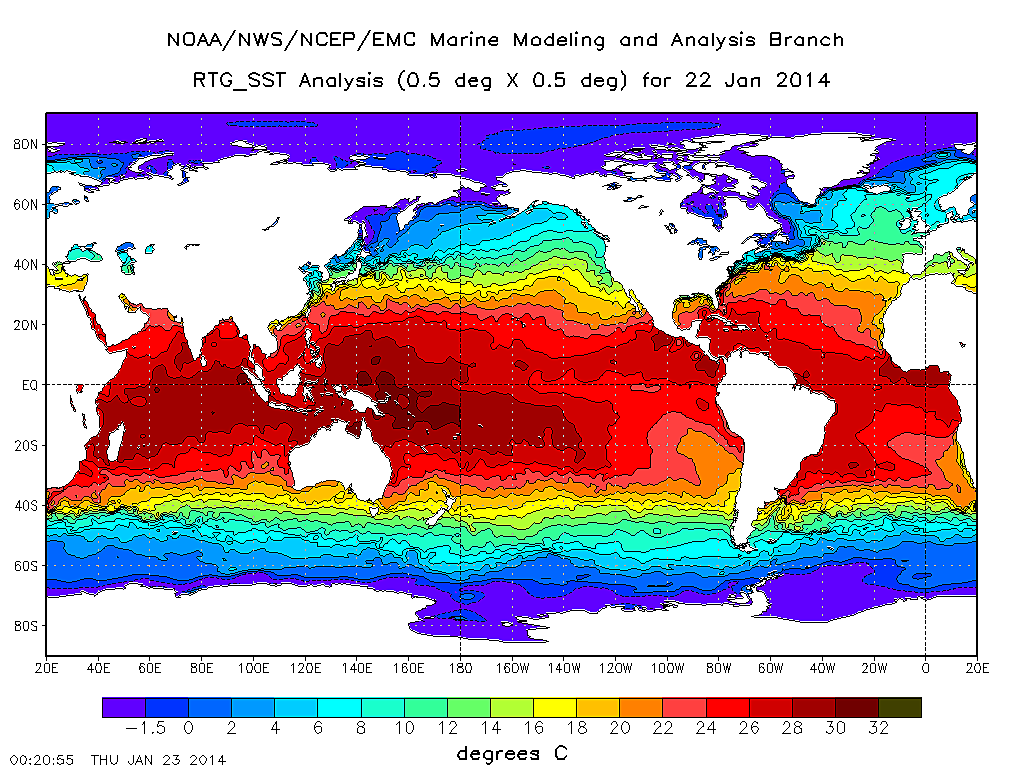 Or its Asian analog?  Or the inverse effect across the oceans?

I could bore you with the details of how the two different models and data assimilation systems differ or the difference between an operational analysis and a climatological reanalysis.  But, it involves lots and lots of physics and higher math--the kind they don't teach in Ed.D programs.

(It's late.  I've been running a fever for three days.  My crankiness is showing.)

Notice the subtle differences beyond the coarser 1/2 degree lat/lon resolution (~50 km square) of the NOAA model and the finer 1/12 degree (~10 km) resolution of the Navy one.  They both ingest the same remotely-sensed satellite data, but their in-situ datasets--provided by buoys and ships--differ slightly.

Which analysis do you expect to contain more in-situ data? Why? Can you track fleet movement and buoy drift by studying temporal changes in global analyses?

San Francisco weather is predictably dull.  Will tomorrow be cold and foggy, or foggy and cold?  But I first became interested in weather for the food.

Please leave your Home Ec stories here in the comments.  Include region, era and curriculum information.  I want to hear your stories!

* He never mentioned the value art for the its own sake.  I overheard some of the teachers discussing how the music program was saved only because musical training correlates with higher standardized test scores in math.  If true, that is beyond pathetic.  Why isn't making music/art for personal enjoyment, and sharing the fellowship of other artists/musicians, sufficiently valuable to preserve in schools?

I really should clarify that this happened at our first meeting in 2007.  He has earned my respect through the way he led our district through the lean budget years.  He cut administrative staff before classroom teachers.  He even took furlough days (and the accompanying pay cut) himself.  I still think it was wrong to single out Home Ec as unworthy of study and irrelevant today.
Posted by badmomgoodmom at 00:07