What I would really like to do is direct...

This being LA and all, Iris attended a summer performing arts workshop (PAW). The kids rotate in groups between instructors for movement, voice and acting. At the end of each session, they put on a show for friends and family. The show consists of skits that the kids wrote, songs and dances that they learned, and a short play.

In the first session, the kids performed (an abridged version of) Peter Pan. Iris landed the role of Michael, Wendy's youngest brother. She seemed very into it so I asked her if she wanted to be an actor. She replied, "No. What do you call the person who tells everyone what to do?"

"You mean the director?" 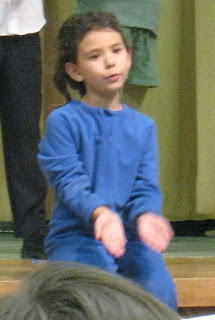 She had taken weekly dance lesson at her schools off and on for the last three years. She did not like the most rigorous teacher, the one that had been a contract player for one of the major movie studios between the time she graduated with an MFA from NYU in dance and when she became a mother. I didn't understand why she didn't like that dance teacher. She appeared to be an excellent teacher. Iris explained, "She makes me do her dance, not my dance."

Well, not to worry. Her movement instructor at PAW may be less experienced (still a dance major at USC), but she really understands kids. She played the song, "Second Star from the Right", for the kids and told them to make up their own interpretive dance. Iris worked on her dance all night. The next day, when they were showing off their moves, the teacher and the class decided that they liked Iris' version so much, they would all do her dance in unison. (See picture above.)

The teacher said that all dances were choreographed by herself except for one dance. She repeated Iris' name twice and said that she was only six and a half. Well, it is not directing, but she got her first choreographer's credit. Maybe we should take up her Tae Kwon Do instructor's offer to introduce Iris to his agent?

I know you are wondering, how did the kids fly on stage? They flew on clouds, of course. A less imaginative person would say that they are sitting on bar stools sheathed in white canvas. But I saw my kid fly, really. 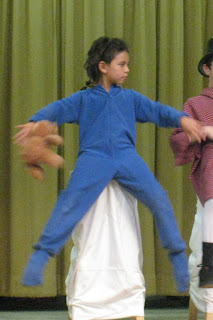 Notice the teddy bear attached to her wrist with elastic? It was such a hoot to watch teddy fly around on stage as she danced. 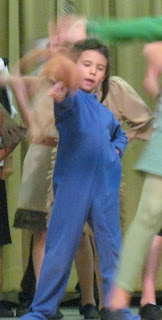 As a general rule, I don't post pictures of other people's kids on the internet without their permission. Therefore, I can only show you tightly-cropped, grainy photos of Iris and teddy. Friends and family can email me to arrange delivery of a DVD with my photos and Mark's video of the production.

Considering all the costumes and props that the other parents had to come up with, I got off easy. All we needed to provide was a teddy bear, a pillow, a blanket, and a footed blanket sleeper. How do you find a footed blanket sleeper in LA in July? Piece of cake. I found it at Lands' End. While I was loading up the virtual shopping cart, I bought her a rolling backpack, a pair of adorable flowered Mary Janes and a cabled cotton cardigan as well. All I needed to do was hem the sleeves and sew up the excess loose fabric at her toes. The only way my job could have been any easier is if I was Mark.
Posted by badmomgoodmom at 19:10