Gaia Girl and Monique named me a Rockin’ Girl Blogger. Thank you very much, but I don’t think of myself as rockin’. Mostly, I am (barely) holding it together.

Now let’s talk about the weather. I found a couple of newish sites that were not yet in my bookmarks that I want to share.

Remember when I had trouble seeing the jet stream analysis at low latitudes? Well, the Navy Research Laboratory in Monterey has put up a new page of satellite imagery with NOGAPS (numerical weather prediction) overlays. It is beautiful AND useful. You can navigate to it from their general satellite page click on “Images with NOGAPS Overlays” on the right, then scroll down near the bottom of the next page to “Jet_Stream” Atlantic. 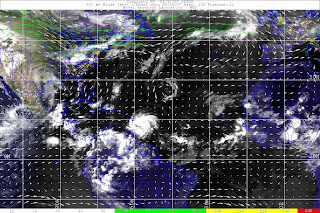 The National Center for Environmental Prediction’s runs Ensemble Forecasts, a set of NWP runs with different initial conditions. The spaghetti plots are difficult to understand, even for meteorologists. However, check out their Tropical storm performance monitor page. Different storms are tracked in separate columns. The date and time that the models were initiated are on the left. For the latest Hurricane Dean predictions, click on the topmost 04L link.

Aren’t the “spaghetti plots” pretty? Unlike the plots I showed two days ago where each line was the forecast from a different model, the same model produced all these predicted storm track lines. The difference is in the initial conditions fed into the model. The initial conditions are produced by a method called “bred vectors”.

That brings me back to Rockin’ Girls again. Rather than name other bloggers, I want to honor some rocking women that made a difference in my life.

Firstly, there is Admiral Grace Hopper, a mathematician and the mother of modern programming languages. She invented the concept of compilers and was instrumental in developing the standards for COBOL and Fortran. It is hard to imagine numerical weather prediction without Fortran. No wonder so many streets and buildings are named after her in Monterey, home of Navy Postgraduate School, Navy Research Laboratory, and Fleet Numerical Meteorology and Oceanography Center.

A colleague, who served in the Navy during the era of the Tailhook scandal, told me that Fleet Numerical is the only duty you can draw in the Navy where women outnumber men. He was in heaven when he arrived. He loved the work, and the work atmosphere. The example set by Admiral Hopper has a great deal to do with the relatively large number of women in numerical weather prediction.

Secondly, I want to introduce Eugenia Kalnay, who tirelessly championed ensemble forecasting at the operational centers. This may be obvious to us today, but it wasn't an easy sell when computational power was more limited and we had to think long and hard about how we spent it. She was also instrumental in developing the mathematics for optimizing selection of the ensemble.

Lastly, I want to introduce Jenny Harrison, a mathematics professor at my alma mater, UC Berkeley. This very sad tale makes me squirm, but I think it is important to talk about it. I never took a class from her. In fact, in my entire 8 semesters at Berkeley, I never took a class taught by a female science or math professor.

Berkeley had only one tenured female professor when Jenny Harrison came up for tenure. She was denied. She was told that she was merely average and average is not good enough for Berkeley. She asked to see her tenure review file. She was stonewalled on the basis of privacy (for the tenure committee members). After much legal wrangling, her file was released to the public. It said that her production of research was average when compared to tenured Berkeley math professors. That is, she was par for the set that she wished to join.

Why, then, was she denied? It is not explicitly stated, but I think it had to do with her personality. Men and boys were really put off by her. I remember a male Freshman at my dorm who complained about her teaching technique. I asked him what he meant. He said that she never called on a male student as long as a female student was available. He would hold his hand up high and she would ignore him and pick female students time after time. Gee, he was complaining about treatment I endured every day in every class. Of course, nice girl that I was, I didn't tell him that. I merely dropped the subject.

Fast forward to the end of the semester and my male professor handed out the final exam and said, "This exam will separate the men from the boys." The other woman in the class and I looked at each other in panic. What did he mean by that remark? We were stressed out enough by the exam itself without being told that we were either invisible or not welcome there.

Fast forward another semester when another student told me that my math teaching assistant was rating the physical attractiveness of the female students in his section during office hours. He told me this because he thought I would be happy to have been rated highest. I was devastated by this and never went to office hours again.

In fact, I was ready to drop out of math altogether until a friend introduced me to Jenny Harrison in the lunch area outside the math building one day. He told her that I was good at math but thinking of discontinuing math studies. Would she talk to me? She motioned for us to sit down and eat lunch with her.

She asked me if I liked math. I told her yes. Then she asked why I wanted to stop studying math. I told her about the uncomfortable environment. She told me that, if I quit, then I had let them win. She told me to study what I wanted and not to listen to the others. (She might have had stronger words than that, but I can't recall her exact words.) I do recall her forcefulness and her total lack of deference towards men. I think it cost her dearly. She won the legal fight, but it took a heavy emotional toll.

So today, I want to honor the women who came before us. They proved that we are good enough and that we deserve a place at the table.