I have two Norah Gaughan projects so close to completion, but I cast on for a new project instead. 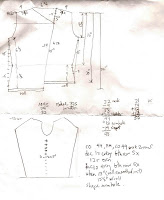 It started with a sketch (left). I then pulled out Ann Budd's grand plan sweater pattern from the Summer 2002 issue of Interweave Knits. I changed my original plan slightly, placing the waist decreases at the sides instead of darts. My pattern deviation from her 40" pullover in 5 sts/in gauge pattern is shown at right.

I used the second Artfibers scarf kit I bought last December. (Here is the result of the first scarf kit.) I supplemented with some leftover yarn from my stash and three skeins of Cascade 220 from my LYS. 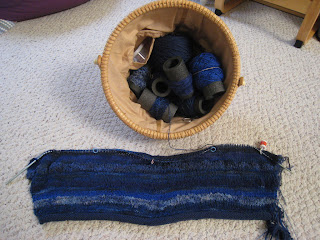 A closeup of the texture: 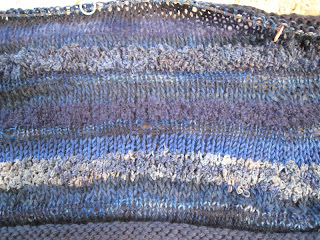 I had plenty of knitting time on date night last Thursday. We had dinner at Rosalind's in Little Ethiopia followed by browsing at LACMA. No photography was allowed inside the galleries of the Dan Flavin and Latin America shows. Mark is a fan of neon art so it was easy to convince him to see fluorescent light art. You can see the glow of my favorite piece below. We quickly strolled through the Arts in Latin America show just before closing. That is a huge and interesting show. We must come back again and allow more time. 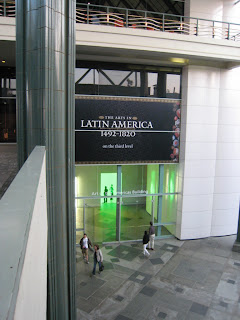 When I looked in the other direction from the catwalk, I saw the sunset reflected off an office building. That's the La Brea tarpits below. Can you see the methane bubbling up? 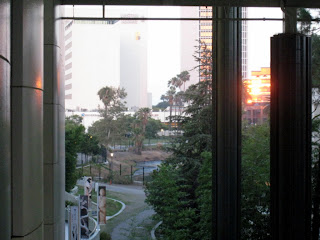 In theory, putting a subway line below Wilshire Avenue, all the way to Santa Monica, is a good idea. But imagine the complexity and cost of digging through a tar and gas field and then making the air safe to breathe down there. I am happy with the MTA Metro Rapid bus that runs on Wilshire. The drivers have transmitters that turn the red lights green for the bus! You can't drive it any faster than that.
Posted by badmomgoodmom at 12:21