I've been dwelling with my collection of Bernina sewing machine feet. Perhaps you have to be a fellow Bernina owner to understand why home sewing doesn't save me money. If the Swiss economy tanks, it won't be for lack of effort on my part. 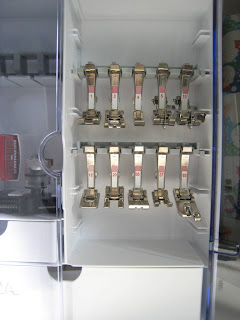 Iris did not have a pair of pajamas that fit for those "pajama days" at school and camp. She usually wears ratty old dresses as nightgowns. I was embarrassed for her on "pajama days". She now has a nightgown (Simplicity 4767) to match the flannel-lined robe I made earlier out of Liberty of London Tana Lawn. She will be the best dressed kid next time. 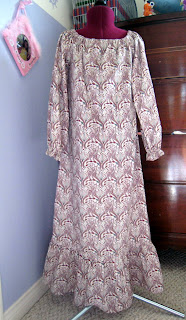 The serger still held pink, not beige, thread so I attempted to make this nightgown without the use of a serger whatsoever. I flat-felled the ruffle strips together and employed French seams elsewhere. I used a rolled hem foot for all the hems. I stitched over (stretched) clear elastic at the wrists instead of making a casing and inserting elastic. I cut a size 8, but the sleeves could be 2" longer. Others on Pattern Review mentioned the too short sleeves also.

When I used the ruffler foot for the first time, it was love. The ruffles were gathered in the time it took to snap in the foot and to sew a straight line. Why did I sew for so long without it? (Um, was it the $100 price tag for the ruffler foot and the shank adapter?) I had to break down and use the serger to finish the seam that attached the ruffle to the gown.

I used the ruffler foot again to make curtains for Iris' IKEA Billy corner bookcase, which she uses as a hiding place and a stuffed-animal playhouse. She helped me attach the adhesive hook side of the Velcro to her bookcase. I sewed the loop side to the top of the curtain and we completed the project in 20 minutes!

As long as I had pink thread in the serger, Iris received a pair of pink and maroon pajamas. I forgot to mark the back with masking tape, so I confused the front and back; the seam in the neckband is in the CF instead of the CB. I had just trained Iris to put the neckband seam in the back when she dressed. A better mother would have redone the neckband. This one turned out the lights and went to bed instead. 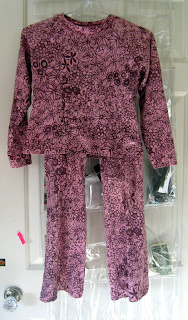 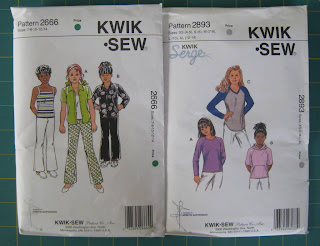 Iris' cousin and Mark's sister stayed with us this weekend. I made two pairs of pull-on pants. I had to change just the left needle thread on the serger to maroon for the bottom pair. 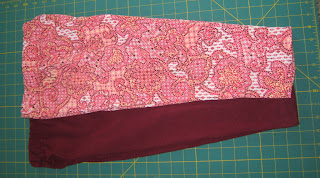 I made the 4T size from Kwik Sew's Sewing for Toddlers. As Iris grew, I collected the whole Kwik Sew set of books, Sewing for Baby, Sewing for Toddlers, and Sewing for Children. Even if you don't make the patterns, it can be worthwhile to buy at least one of Kerstin Martensson's books just to learn her quick techniques.

I find KM techniques very easy, and they give better (albeit slightly slower) results than Serged Garments in Minutes. The latter's techniques are comparable to the cheap things you would find at the Gap. Why imitate cheap construction techniques at home?

Today's LA Times ran a Melissa Magsaysay piece, Gift-buying made simple. She advocates making the same signature present for everyone. With 55 yards of the Tana Lawn score remaining, I could do that. But I won't. The rest of you can buy your own Tana Lawn PJs online.

More about Kwik Sew patterns in Sweatshop and More from the BMGM Sweatshop.
Posted by badmomgoodmom at 17:58